A new cycle lane along Dyke Road which aims to build upon pro-cycling changes along Old Shoreham Road and at the Seven Dials looks likely to get the go-ahead. 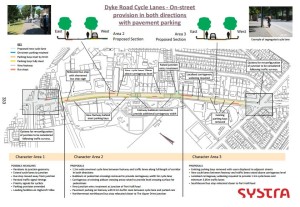 Plans for the £350,000 lane between The Upper Drive and Old Shoreham Road have been recommended for approval by Brighton and Hove City Council’s Environment, Transport and Sustainability Committee which meets on Tuesday (7 October).

The lane, which will lead to the loss of about 20 parking spaces, was originally proposed earlier this year but the scheme has been amended after a consultation.

A report to the committee said: “Recent improvements to the pedestrian and cycle network have been made in the vicinity of Dyke Road to improve conditions for active travel including at Old Shoreham Road and Seven Dials.

“The proposals to create a supportive, safe and encouraging environment for active, sustainable travel along this section of Dyke Road are key to addressing pressure on the transport network and building on the success of these previously constructed schemes.”

The scheme will be paid for with £250,000 from government transport funding and £95,700 from BHASVIC (Brighton, Hove and Sussex VI Form College) as a condition of planning permission for its extension.

The lane is split into two main sections. From The Upper Drive to Port Hall Road there will be

And from Old Shoreham Road to Porthall Road