Plans to turn the derelict ice rink in Queen Square, Brighton, into flats and offices have been rejected.

The reasons revolved around the bulk, scale and massing of the proposed block of flats and its effect on people living in Wykeham Terrace – the loss of amenity.

Councillors were also concerned about the effect of the plans on the neighbouring listed St Nicholas Church.

The proposed five-storey building was slightly lower than the hotel proposed for the site two years ago.

The hotel was granted planning permission and the permission still stands although the hotel has not been built.

Diane Moody, from the Wykeham Terrace Residents’ Association, said: “Overall we support this proposed change of use to a mixed use residential and commercial property. 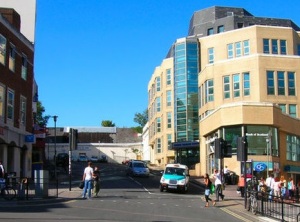 “Having said that, we are extremely disappointed and concerned that the views expressed through the public consultation by neighbours … have been largely ignored.”

The main objections, she said, were overlooking and the general bulk and mass of the building.

“The rear of the Wykeham Terrace (gets) morning sun. The sheer height and overbearing inclination of the property will eliminate the morning sun.”

The changes to the third floor would, he said, “delay sunrise by approximately two hours”.

Councillor Lizzie Dean said: “There are compelling reasons to refuse the application.”

The main concern was the height of the building. The height and bulk went against the council’s own guidelines, she said, and would affect views from St Nicholas Church.

She added: “Nothing is really replacing the ice rink.” And she acknowledged that “the ice rink building is very dilapidated”.

Planning officer Sue Dubberley told the Brighton and Hove City Council Planning Committee: “The ice rink has been vacant since 2003.”

Architect Paul Zara, from Conran and Partners, in Queen’s Road, Brighton, said that the application was for a building that was not as tall as the hotel that was previously granted permission.

Six of the 31 flats – almost 20 per cent of them – would be classed as affordable.

Conservation Advisory Group representative Jim Gowans objected to the loss of views that would result from the proposed block of flats.

Mr Gowans said that the flats would be built nearer St Nicholas Church and Wykeham Terrace than the hotel plan even though the bulk and height had been modestly reduced.

He said that Brighton’s heritage was at risk of being sacrificed for very little public benefit.

Councillor Lynda Hyde and Councillor Ian Davey said that the objectors to the hotel proposal were worried about noise. Homes would pose less of a noise problem.

Councillor Les Hamilton said that the proposed building was incompatible with the neighbouring properties in Wykeham Terrace. It could be midday before they saw the sun, he said.

Councillor Carol Theobald said that a four-storey building would have been better.

Councillor Andrew Wealls said that the scheme would generate a planning gain of £183,000 for the council along with the six affordable homes that were included in the scheme.

He joined five other members of the committee to vote against the scheme – which had the support of planning officials.

Five councillors backed the application and one abstained.

The meeting was held in the banqueting hall in Hove Town Hall after heavy rain affected the electrics in the council chamber.