Hanover pub set to be converted into family home

Another Hanover pub sold by Enterprise Inns is set to be converted into a four-bedroom family home. 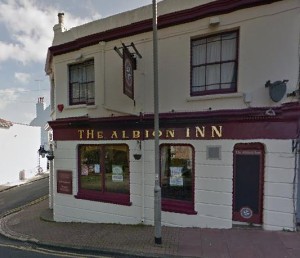 The Albion Inn, on the corner of Albion Hill and Jersey Street, had its farewell drinks on January 4 this year after being put on the market in June.

Now, an application to turn it into a four bedroom house has been submitted to Brighton and Hove City Council by its new owners Mr and Mrs Ferrari.

The application says: “It is understood that the public house is no longer financially viable due to the declining industry and the over concentration of pubs in the Hanover area.

“Whilst the application site has been marketed since June 2014, the main interest in the property has been from potential purchasers seeking to convert the pub into flats or a single house.

“The applicants have recently acquired the property and are seeking to convert the pub into a single dwelling for their family.

“Other than removing the signage lettering and the hanging pub sign, no external alterations to the building are proposed. “

It quotes a planning officer’s pre-application advice that this, coupled with the recent conversion of the London Unity, means there would be no policy objection to the conversion.

One former regular and neighbour, Jane Goodwin, said that while the pub had been great in its heyday, its character had changed in recent years.

She said: “I’m very happy it’s closed as we experienced a lot of noise from there.

“Having said that I met my husband in the Albion Inn. If it wasn’t for the Albion I probably wouldn’t have the beautiful son and husband that I have now!

“It used to be full of real working class characters and had many a fun evening there. Sadly, when those characters demised (for want of a better word), so did the pub.”

She added that she knew the Ferrari family, and that they had lived in the area for years and knew it well.

West Pier arches behind i360 to be rebuilt, not restored