Brighton and Hove binmen have upgraded their ongoing industrial action to a strike once again as the long-running dispute over pay and grading for refuse drivers rumbles on. 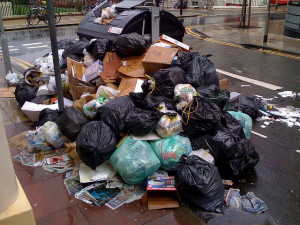 The drivers will strike on February 11 from midnight until 11am, and warn the action may escalate further.

Mark Turner GMB Branch Secretary said: “Once again council officer’s lack of both commitment and ability to finding a resolution has meant our members are left again with no alternative other than to take further direct action.

“They will lose money and the people of this city potentially will see rubbish remaining uncollected, something that we and they deeply regret.

“But our members completely refute council claims that an independent job evaluation has been carried out on their role.

“The make-up of that panel, on behalf of the Council, has and would prohibit it from being so, therefore simply challenging a process and outcome from a panel they have no faith or trust in, through potentially another biased panel for an appeals process is both a waste of time and would only seek to widen the mistrust further between drivers and management.

“Our request to see a return to the initial evaluation process and a panel who are openly transparent and fair has been refused, and therefore the council has not only managed to snatch defeat from the jaws of victory, but increase the differences between both sides to a point where it’s now difficult to do anything other than clash head on again.

“If the council spent less time trying to trick, cajole and intimidate their way to a solution and instead accept they had not handled the job evaluation in a correct manner, then we perhaps we can finally get around a table with some belief that an equitable solution was not far away, and that the job evaluation and any result it throws up could be trusted.”

Leader of the council Jason Kitcat said: “With the agreement of all three political group leaders on the council officers have been proceeding with planning for a service redesign of CityClean and City Parks.

“In good faith officers brought forward redesign of the refuse driver job description to help resolve the ongoing dispute with those drivers.

“As agreed that description was rewritten with the involvement of the union and then sent for an independent panel evaluation process.

“This panel process is one both GMB and Unison withdrew from participating in several years ago.

“The assessment of the panel was that the alterations to the driver job description did not constitute a material change from the current level of responsibility and so the pay grading stayed the same.

“I am saddened that through their industrial action this small number of drivers continue to inconvenience residents just because they feel they should be paid more than their colleagues in street cleaning who supervise up to 20 people’s work every day.

“Officers continue to stand ready with an open mind to negotiate with GMB and we absolutely respect GMB’s responsibility to represent their members.

“However we cannot allow one small group of drivers to force a pay increase for themselves which would just take us back to the bad old days.

“Those were the times of unequal pay between men and women, the dirty secret left by previous administrations that we dealt with in 2013.”