Neighbours of a house which collapsed in Brighton’s North Laine yesterday afternoon have been told they may not be able to return home until the weekend. 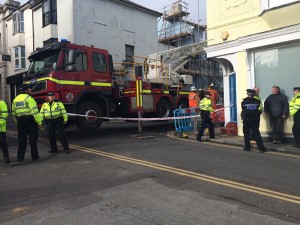 Several people were evacuated after a wall of a house in Over Street collapsed shortly after 1pm yesterday.

Roads were closed while firefighters worked to make the scene safe, before handing over to the council’s building control team.

This afternoon, the council said it hoped to have secured the site by the weekend.

A council spokesperson said: “Following the failure of the end gable wall at 1 Over Street, scaffolding has been erected to the front side and rear of the property with shoring into the street on the front elevation to retain the remaining walls and prevent any risk to the adjoining properties.

“We are hopeful that by the weekend the immediate danger will have been removed, the site secured, and residents who have been displaced will be able to return to their homes.”