Cat Fletcher, the “resource goddess” behind the University of Brighton’s Waste House, today was named by the Prime Minister as one of Britain’s top volunteers. 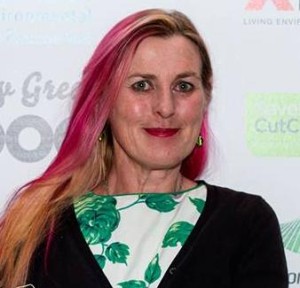 Cat, university volunteer, Reuse Manager for Brighton and Hove City Council and co-founder of FREEGLE, the UK’s largest online reuse network, received the daily ‘Points of Light’ award which recognises outstanding individual volunteers, “people who are making a change in their community”.

The award was developed in partnership with the Points of Light programme in America, established by President George H W Bush, and supported by President Barack Obama.

Downing Street said: “Cat is one of the founders of Freegle, a free sharing network that allows people to reuse unwanted goods. Launched in 2009, it now has more than 1.9 million members in over 400 community groups across the UK. Cat now runs Freegle Brighton and has saved thousands of tonnes of useful but unwanted goods from landfill, donating them to charities, social enterprises and good causes in her area.”

Cat, whose CV is headed “Resource Goddess”, said she was thrilled with the award: “I’m really pleased but a lot of other people can take a bow today. FREEGLE and the university Waste House successes wouldn’t have been possible without an army of helpers and I’d like to think this award reflects just as much on their hard work and dedication.” 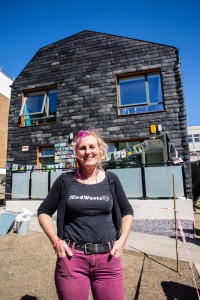 The Waste House, in the grounds of the university’s campus at the College of Arts and Humanities in Grand Parade, Brighton, is Britain’s first house made almost entirely of rubbish including 20,000 toothbrushes, two tonnes of denim jeans, 4,000 DVD cases, 2,000 floppy discs, 2,000 used carpet tiles, construction waste and surplus material.

The House, open to the public, is a ‘live’ ongoing research project and permanent new design workshop focused on enabling open discussion and understanding of sustainable development.

Professor Julian Crampton, Vice-Chancellor of the University of Brighton, said: “This award is richly deserved and we offer Cat our warmest congratulations.

“Cat has been a main driving force behind sourcing thrown-away and surplus materials for the Waste House project. In doing so, Cat has demonstrated how so-called rubbish can be put to good use. The House mirrors work going on throughout the university with its commitment to cutting energy consumption and emissions, increasing recycling and ensuring that sustainable development and procurement are embedded in all our practices.”

Professor Anne Boddington, Dean of the university’s College of Arts & Humanities, said: “We are delighted that Cat’s expertise and significant contribution to sustainability, waste management and to working with and within communities is being recognised by this prestigious award. Cat has helped propel the university’s Waste House onto the world stage and now students, politicians, the housing industry, and indeed countries around the globe, are learning from the project as a way of helping tackle climate change.”

Duncan Baker-Brown: “This latest award acknowledges Cat’s huge energy, enthusiasm and commitment to working with our local community groups, schools and colleges, as well as with our own students here at the University of Brighton. Cat’s knowledge around issues of re-using waste material is, in my opinion, unmatched. Her knowledge was invaluable in helping the university deliver the Brighton Waste House, Europe’s first permanent public building made of material others had discarded.”