The latest phase in the transformation of the roads around Brighton Station has prompted more anguish from motorists frustrated by city roadworks. 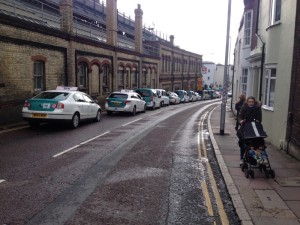 Brighton and Hove City Council has closed Terminus Road to southbound traffic until March 6 so that taxis can use it as a temporary rank while the station approach road is resurfaced.

And until the entire scheme is finished in the summer, southbound traffic will not be permitted south of Trafalgar Street and Guildford Road.

But in the meantime, drivers are annoyed at the delays:

@albionroar terminus road closed for 2 weeks to be a taxi rank. Buses diverted down Buckingham Road. Wow. Carnage as well as dangerous

However, it could have been worse – the council postponed repairs to the Seven Dials roundabout until the station works are completed to avoid a roadworks double whammy.

Green plan to make Brighton a model for legal cannabis