The Mazda fountain in Victoria Gardens would not survive a £20m reworking of Valley Gardens. 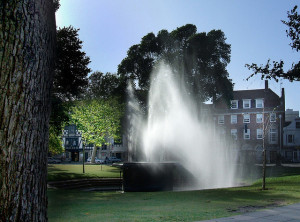 The ambitious plans, which were this week given £8m of funding by the Local Transport Board, would see the road layouts changed from St Peter’s to the Aquarium roundabout.

But while the Victoria fountain on the Old Steine would remain, the Mazda fountain at the northern end of Victoria Gardens would be removed.

In a list of answers to frequently asked questions, Brighton and Hove City Council explained: “The Mazda Fountain has no inherent historic connection to Valley Gardens – it was designed for the British Empire Exhibition in London.

“Because the Fountain was designed for a very different environment, it is not particularly suited to the Valley Gardens context.

“The inefficient operation of the fountain is inconsistent with principles of sustainable water management.

“Better use could be made of money currently spent operating and maintaining the fountain – potentially this money could contribute to a more efficient water feature designed for the Valley Gardens context.”

Instead, it suggests a fountain  or other water feature in front of St Peter’s Church and a shallow rill, or narrow gully, running through the area.

However, the plans may never come to fruition as Labour says if it wins May’s local elections, it will put them on hold.

The electric fountain was given to the city by Thomson-Houston (BTH) in 1930, possibly to promote the company’s cinematic sound systems which were first installed at the Duke of York’s cinema. 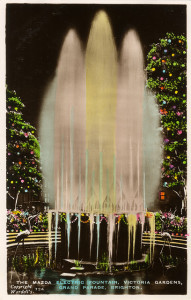 It later fell into disuse, but in October 1987 it was switched on again, and different coloured lights lit up its 35ft high jets.

The removal was highlighted this week in a discussion on Twitter about how the fountains would work within the new Valley Gardens scheme.