Almost 3,000 people have signed a petition launched in support of Brighton bar Northern Lights within less than a day of it being launched. 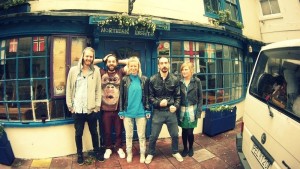 The Little East Street bar faces having its opening hours restricted and even its licence suspended by Brighton and Hove City Council next week.

The review follows a request by Sussex Police, which says the Scandinavian bar is regularly breaching its licence as a food-led venue and instead allowing “vertical drinking” – e.g. drinking while standing without food being served.

Now, a petition has been launched asking the council to review the police’s evidence.

Started by Liam Hardy at about 11pm last night, it says: “Northern Lights is an independent Scandinavian bar & restaurant set within a 300 year-old fisherman’s cottage in the heart of Brighton.

“There is no big company backing them up and there are no expensive legal teams that can be called in to fight their cause (a perk enjoyed by aforementioned chain-bars), but we who support them can still make a difference.

“We urge the council to protect Northern Lights, and to honour their own “Statement of Licensing Policy” in which they encourage diversity amongst premises in order to cater for as many different members of the community as they can.

“Promoting these policies they say “gives potential for positively changing the ambience of the city or an area of it.”

“Right now however, the risk is being run of not only alienating the Scandinavian community of our city, but negatively affecting that ambience.”