Police investigating a series of armed robberies have released CCTV footage in the hope that someone may recognise the suspects from their voices. 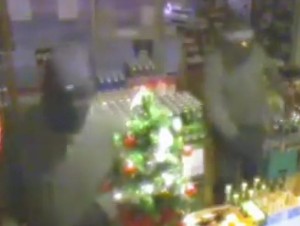 The raids occurred between November 28 and December 16 in Portslade, Hangleton and Shoreham and the CCTV shows the suspects entering the off licence in Queen’s Parade, Hangleton, around 10pm on December 16.

In each of the incidents, up to three suspects entered the locations armed with knives or other weapons, threatened or assaulted staff and demanded cash and cigarettes.

Detective Sergeant Chris Lane said: “Although the video does not clearly show the faces of those who entered the shop in Hangleton, their voices can be heard on the soundtrack. One of them repeatedly refers to the other as ‘S’ and we would like to hear from anyone who recognises them from their voices.

Two men, both aged 18, from Hove and Portslade have been arrested on suspicion of robbery and have been bailed until March 9.