An irresponsible dog owner has apparently added insult to injury by tearing down dog mess posters and then allowing their hound to poo on them. 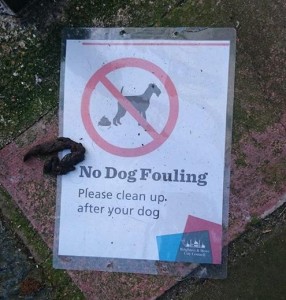 The council posters were put up in Chesham Road, Kemp Town, earlier this month and within days had been torn down.

And to residents’ disgust, a stinky present had also been left on one of them in defiance of the message.

Ian Thain, who lives in College Road, said they were put up by the council a week or two ago and torn down within days.

He said: “There is a really bad dog mess problem around this area, Somerset Street and Hereford Street being particularly bad with up to 20-30 foulings frequently.

“It is getting truly disgusting. I personally confront anyone I see not cleaning up after their dogs and can’t understand why more people don’t.

“These disgusting and anti social people are not fit to own dogs and should have their dogs taken off them if they are caught being irresponsible in this way.”

A council spokeswoman said: “We work hard to promote responsible dog ownership in the city and encourage owners to clean up after their pets.

“Therefore it is disappointing to see that there are still those who choose to flout the law and undermine our efforts.”