The city’s police chief says he expects Brighton and Hove to see more traveller camps in its parks and open spaces than usual this year. 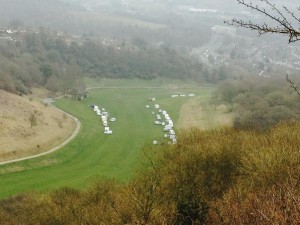 Caravans set up camp in Wild Park this morning. Picture by Joy Flowers on Twitter

The number of unauthorised camps on public land last year was almost twice as many as in 2013, with Brighton and Hove City Council going to court 38 times compared to 21 in 2013, and just 13 in 2012.

They also show that Stanmer Park had the most unauthorised encampments last year, with six evictions, followed by Sheepcote Valley with five and Black Rock with four.

Already this year, there have been several unauthorised camps, with travellers, gypsies and van dwellers currently in Stanmer Park, van dwellers at Lynchet Close, and reports this morning of travellers at Wild Park.

Chief Superintendent Neville Kemp told Brighton Kemptown MP Simon Kirby police are expecting there to be an above average number of unauthorised encampments in the city this summer, owing to the ongoing redevelopment of the Horsdean Transit site.

But he also told Mr Kirby police expect the situation to substantially improve for years to come.

The comments were made at a meeting to discuss whether the city could use a high court injunction to stop encampments on all the city’s parks, after Harlow Council in Essex was granted an interim order to this effect.

During the meeting, the Chief Superintendent explained that an injunction similar to that in Harlow may make policing unauthorised encampments both easier and more effective.

But the city council’s lead councillor for the environment, Pete West, said that while the council would keep note of how the injunction progresses, it did not feel a city-wide ban acknowledged travellers’ right to a nomadic way of life.

Cllr West said: “We do not tolerate unauthorised traveller encampments and continue to take into account all legal options open to us in dealing with them.

“However, we do not feel that city-wide bans on travellers acknowledge their legal right to their way of life.

“It is also important to note that the Harlow action is at the moment an interim order. This means that it has not yet been finalised by the Court and is subject to challenge. As such we will be keeping it under review.

“A significant part of the problem faced by travellers is the national shortage of accommodation, either temporary or permanent. Brighton and Hove is at the forefront of addressing this issue.”

Speaking after the meeting, Mr Kirby said: “Many residents will be concerned by the prediction of even more unauthorised encampments this year and it underlines the importance of the council and police having in place a strategy to tackle the problem.”

The figures showing the sharp rise in encampments were published in response to a Freedom of Information request to Brighton and Hove City Council.

The months with the most number of camps set up were February with six, April with seven and September with nine.

In contrast, just four camps were set up in July and August, and just one in June.

Hollingdean and Stanmer ward councillor Christina Summers said: “The increase is due to areas where they used to camp without much impact having been developed on, such as Varley Halls in Coldean Lane.

“The sensitive sites are mainly the ones which are left to them. They’re appearing much more often and in bigger numbers on the parks.

“Some of the encampments in the run up to last summer were huge and in one month there was almost a circus of camps going between Preston Park, Stanmer and Wild Park.

“There’s no silver bullet – as far as the permanent site is concerned we have to trust that will do something to alleviate the pressure.

Cllr Summers, who was elected as a Green councillor and is now an Independent councillor, said: “It’s a conundrum, and certainly for the Greens, it’s be the number one issue – within an hour of getting into power we had to deal with an unauthorised encampment and it’s been nonstop since then.”