The charity Blind Veterans UK marked 100 years of service in Brighton this week.

The centenary was marked with the unveiling of a plaque at Sussex House, previously known as Pearson House and West House.

The charity began working in Brighton two years before taking over the building which is now used by Brighton and Sussex University Hospitals NHS Trust.

Blind Veterans UK still cares for dozens of blind ex-servicemen and women and those who have impaired sight at their Ovingdean centre.

The plaque was unveiled by Raymond Hazan, 70, from Seaford, a blind veteran who has received support from the charity for more than 40 years and is now its president.

He was on his second tour of duty with the Army in Northern Ireland at the time.

He has been helped by Blind Veterans UK ever since and became the charity’s president in 2004.

Mr Hazan said: “This is a very special day for me and the charity. I am honoured to have been asked to unveil this plaque.

“When I was first injured I did my initial training in this building. To me, it signifies the beginning of my journey discovering life beyond sight loss.

“I owe Blind Veterans UK so much. I have made so many friends over the years and gone on to achieve things that I would never have believed possible when I first lost my sight.”

Another person attending the ceremony on Thursday (19 March) was Jill Dunn who has a connection to the building and the charity going back more than 50 years.

She left in 1970 to marry Dennis Dunn, one of the blind veterans supported by the charity. At the time, she lived in the adjoining cottage, Westcott House.

She said: “It wasn’t like a hospital at all. It was much more like a family home. It really was a beautiful place to work.

“Our job … was to care for the veterans but also provide companionship. We would often accompany them to the theatre or take them down to the bookies! 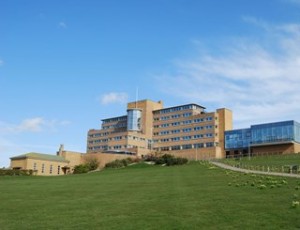 “The people of Kemptown were so good to us. They always let us jump queues in shops or at the barbers and helped when we were out and about in the area.

“The building has a special place in my heart as I met my husband there.”

“The charity has got such a connection with the Brighton area and has had a presence here from its earliest days.

“In 2015 Blind Veterans UK is helping more people than ever before in the charity’s history.

“There are still thousands of veterans with sight loss that could be entitled to our help though.

“Today is a good day to remind people to contact Blind Veterans UK if they or someone they know could be receiving our free, lifelong support.”

When the charity was started in January 1915 it was intended to help and support soldiers, sailors and airmen blinded in the First World War.

It went on to support more than 35,000 blind veterans and their families, spanning the Second World War and recent conflicts, including those in Iraq and Afghanistan. The charity helps veterans regardless of when they served or how they lost their sight.

The charity currently provides rehabilitation, training, care and recreational activities at its three centres – in Brighton, Llandudno and Sheffield. And it has a network of welfare staff across the country.

Hundreds to raise money for RNLI on waterslide in Brighton today