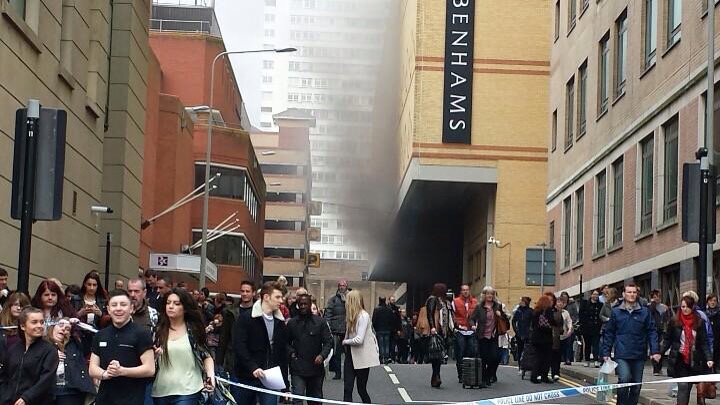 Churchill Square has been evacuated after a fire broke out in the car park.

The blaze, reported to be a burning car, broke out just before 12.30pm at the Brighton shopping centre.

Shopper Denise Whittington tweeted: “Fire alarm going off in Churchill Square: being evacuated because of fire in car park- smoke pouring from building.”

Andy Staniford took this picture of smoke billowing out of the car park.

Sussex Police said that there were no reports of anyone being injured but warned of “serious disruption in Brighton”.

The force said: “Shoppers and motorists are being warned of serious disruption in central Brighton on Saturday afternoon (4 April) following a fire in a car park at the Churchill Square shopping centre.

“The fire, at this stage believed to have affected three cars, has been extinguished.

“But the centre, which was evacuated at around 12.25pm, is not expected to reopen until at least 2.15pm.

“This is to allow safety checks to be made and for smoke to dissipate.

“Churchill Square management and staff worked quickly in co-operation with the emergency services to evacuate the centre and there are not believed to be any casualties.

“The circumstances of the fire are being investigated by East Sussex Fire and Rescue Service and Sussex Police but it has not yet been established how it broke it out.”