Brighton and Hove once again shrouded in spooky sea fog

A thick sea mist has again enveloped the city in its spooky grip as warm spring air moves over the cool waters. 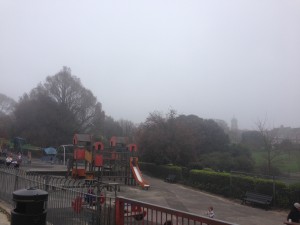 But for anyone worried this might mean high levels of air pollution, (sea) fret not – the government has no warnings in place today, with low levels forecast for the whole of the UK today.

While it’s common for sea mist come up onto the beach in spring and early summer, as happened last Thursday, today’s fog has travelled much further up into the city than usual.

Last Friday, the government warned people to reduce outdoors exercise because of high levels of pollution caused by Paris smog and Saharan dust being blown in over the channel.

Lovely day in Brighton , in the fog pic.twitter.com/kmQsXTUGW3