A seafront hotel stripped of its alcohol licence last year following complaints from neighbours has lost an appeal and been ordered to pay £22,000 costs. 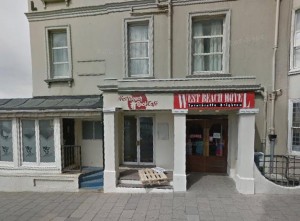 Magistrates decided to uphold Brighton and Hove Council’s decision to revoke the licence of the West Beach Hotel in Kings Road after hearing evidence from licensing and environmental health officers, and local residents.

In their judgement, following the two day hearing, magistrates concluded that the West Beach hotel had “clearly failed to promote the licensing objectives, had failed to engage and were reactive not proactive.”

They added that local residents and businesses had to suffer an unacceptable level of disturbance since 2010 from the Cubar and the night club.

Welcoming the decision, the council’s head of regulatory services Tim Nichols said: “We are delighted that the magistrates have endorsed our decision to revoke the licence of the West Beach Hotel.

“This nightclub was causing a public nuisance and our environmental health officers worked closely with residents whose lives were clearly being made a misery by continuous late night disturbances.

“We hope this decision sends out a strong message to other venues that this council is committed to tackling noise nuisance and antisocial behaviour and will take the necessary steps to protect the health and well-being of our residents.”

The West Beach Hotel, which lies within the city’s cumulative impact area, lost its licence in September last year following a long history of complaints from residents and businesses about on-going noise nuisance from within and outside the premises.

Residents who kept detailed diaries, complained about noise and anti-social behaviour from the hotel bar (previously known as Cubar) and Ammos nightclub in the basement of the building. This resulted in warnings issued by the Council’s noise and licensing team and interventions from Sussex Police.

Efforts by Environmental Protection and licensing officers to try and resolve the problems failed and last year, the situation deteriorated.

The magistrates’ decision leaves the hotel with a two standard licences until 11pm covering the hotel/bar and ground floor restaurant.