Police in Brighton are seeking two suspects who robbed a man of cash on Brighton seafront in the early hours of the morning. 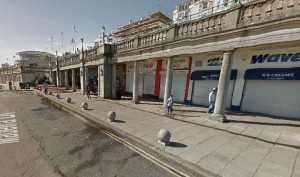 At 5.15am on Saturday (16 May) the 24-year old local man was sitting in Madeira Drive, Brighton, just east of Volks Club, when he was approached by two men who asked him if he wanted to buy any drugs.

When he refused to do so, they attacked him and stole £70 cash.

He was kicked twice in the face but declined hospital treatment.

One of the suspects is described as Hispanic, in his mid-twenties, 5ft 5in, and stocky, wearing a blue polo shirt and a dark blue cap back to front. He had a scar on his right cheek.

The other suspect is described as 6ft and of slim build.

Detective Constable Gemma Holley said; “If you were in the area of Madeira Drive early on Saturday morning and saw what happened or have any other information that might assist, please contact us via 101@sussex.pnn.police.uk or call us on 101, quoting serial 246 of 16/5. You can also call the independent charity Crimestoppers anonymously on 0800 555 111.”