An 18-year-old student from Brighton is to climb Africa’s tallest mountain to raise money for a meningitis research charity.

Joshua Bond, who is studying accounting and finance at Kent University, hopes to raise £3,000 for the Meningitis Research Foundation (MRF) by trekking up Kilimanjaro in September.

He will climb the 5,890m mountain in Tanzania during a six-day trek. 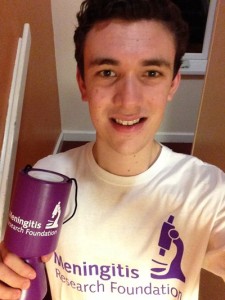 He said: “This is not only a once in a lifetime opportunity for myself but I aim to raise as much awareness as possible for meningitis.

“Many people have been affected by this disease. From talking to people who have sponsored me and also personal experience, I have found out that meningitis can not only change a person’s life in a matter of hours, but a whole family’s.

“I hope my support for MRF can raise much needed awareness and I would like to thank everyone who has been so kind and generous for supporting me and MRF.”

The foundation’s events fundraising assistant Tom DeFraine said: “We are so grateful to Joshua for agreeing to climb Kilimanjaro in aid of MRF.

“Meningitis and septicaemia are diseases that can leave a baby, child or adult fighting for their life within hours of the first symptoms.

“As well as having the adventure of a lifetime, they will be raising much-needed funds and awareness of this devastating disease.”

For further information on taking part in a challenge for MRF, contact Tom DeFraine on 01454 280413 or tomdf@meningitis.org.

The trek is run by Choose a Challenge which creates tailor-made adventures for students.

The Meningitis Research Foundation said that there were an estimated 3,200 cases of meningitis in Britain each year.

The charity said: “They are easily mistaken for milder illnesses but unlike a dose of flu can kill within hours and may cause serious, life-long disabilities.

“As many as one in ten of those affected will die and a third of survivors will be left with after-effects, some as serious as brain damage, amputations, blindness and hearing loss.

“Despite the impending introduction of the MenB vaccine for babies in the UK, we remain concerned that there is no catch up campaign for toddlers and no recommendation for teenagers, the second highest ‘at risk’ group, to be routinely vaccinated.

“Vaccinating this age group has the potential to protect the wider population because they are key to transmission and spread.

“We have invested £17.5 million on 140 research projects since the charity was launched in 1989 and we spend around £1 million annually supporting those affected and raising awareness.

“Our Freefone helpline – 080 8800 3344 – provides information to the general public and those affected by the disease.

“We provide symptoms information, research and case studies at www.meningitis.org.”