A group of travellers which had previously set up camp on an ancient burial ground in Hangleton have now moved to a current one in Woodingdean. 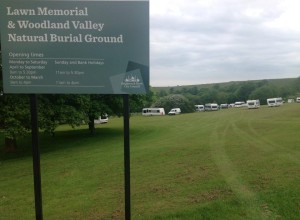 The group of Irish travellers were due to be evicted from St Helen’s Green in Hangleton, thought to be a burial ground connected to the mediaeval church which stands next to it.

But yesterday evening, before the notice could be served, they moved to land next to the Woodingdean Memorial Cemetery in Woodingdean.

A council spokesman said: “We’re highly aware of the fact it’s a sensitive site. So we’re due to attend the encampment with police today to establish what prompt action the law of the land enables us or the police to take.”

MP Simon Kirby said: “I have been contacted by many residents who are extremely concerned about the illegal traveller encampment at Lawn Memorial Cemetery in Woodingdean.

“Residents with loved ones buried at the site are particularly upset about the illegal encampment. I have raised these concerns with Sussex Police and Brighton and Hove City Council.

“Brighton and Hove City Council has sufficient powers to swiftly deal with illegal traveller encampments, which has been made clear by government ministers.

“I urge the city council to make full use of these powers to ensure that the illegal encampment is removed from this sensitive site as soon as possible.”

Meanwhile, another camp has set up in Preston Park after leaving Hollingbury Park, just days after another group was moved on from there.

Both camps are being visited by the council and police.

The council is due to go to court on Thursday for an eviction notice for a third camp of van dwellers at the BMX site in Sheepcote Valley and land next to the Racehill allotments off Wilson Avenue.

Just over the city border in Southwick, an illegal traveller camp on Southwick Green was moved on the same day it arrived. after police served a Section 62A notice.

Sussex Police says it was only able to use the notice because of the opening of an official transit site in Chichester last month, to which they were able to direct the travellers.

Chief Inspector Will Rolls said: “After this encampment was reported to us we carried out a visit to the site to make an assessment and check on the welfare needs of the people there. This was carried out jointly with staff from West Sussex County Council.

“The use of powers under section 62 were authorised and officers gave the encampment a direction to leave as there were spaces available at the newly open transit site.

“The group subsequently left the location at around 11pm that evening. We have not received any reports over the weekend of damage or crime.”