A group of travellers told they were to be evicted from a burial ground in Woodingdean for poor behaviour within hours of setting up camp have moved on. 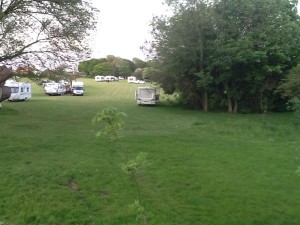 Brighton police served the camp, and another in Preston Park, with a Section 61 order yesterday requiring them to move by this morning as a result of poor behaviour.

It’s believed both groups of Irish travellers have now set up camp in Hollingbury Park on Ditchling Road – where another camp had just disbanded on Monday.

I am using Police powers requiring the encampment in Warren Rd, #Woodingdean is vacated tomorrow AM due to sensitive site & poor behaviour

The speedy evictions come as the city’s new Labour administration says it will prioritise a review of the powers available to the council to move on travellers.

But leader of the council Warren Morgan has warned more unauthorised encampments are likely this summer as the Horsdean transit site is redeveloped.

Coun Morgan said: “I, and the council, do take this very seriously and are very concerned about the impact of trespass onto public parks has on the residents of the city and the cost to the local taxpayer.”

However, he explained the council’s hands were tied by the fact each eviction takes 10 to 14 days to go through the courts, notices are served against individuals on particular sites.

And the most powerful notice, Section 62a of the Criminal Justice and Public Order Act, requires travellers to be redirected to a transit site run by a social landlord within the city.

The only such site within Brighton and Hove is at Horsdean, and is due to close this summer to be redeveloped to add 12 new permanent pitches to the existing 21 transit spaces.

He said: “The weakness with the existing legislative framework is that it does not prevent repeated trespass in the same location by different people or stop the same people trespassing elsewhere.”

He also said the council was looking at places such as Harlow which have obtained temporary injunctions forbidding travellers from pitching up at a wide range of sites with a prison sentence the maximum penalty for breaching it.

He added: “It is important to note that these are interim injunctions and are subject to challenge in the High Court where they could be overruled.

“Further to this they have been made mainly against named people. This is a relatively new development and until case law is made, we will not know its full extent.

“It has also been identified by our lawyers that there may be some considerable problems with enforcing injunctions in relation to people whose identities are not known.”