Armed police were called to a man who was threatening to fire a gumn at himself and anyone who came near him in Hove yesterday evening. 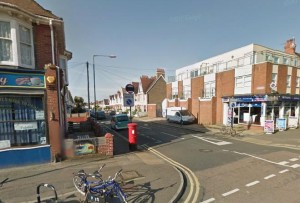 Police were at the flat in Titian Road, Hove, for more than two hours before entering and arresting a man on suspicion of affray.

No gun was found, but police have recovered two knives.

A police spokesman said: “Shortly after 6pm, police were called to a flat in Titian Rd, Hove, after a report that a man, the sole occupant, was in a distressed state, had access to a firearm, and was threatening self-harm, and harm to anyone who approached him.

“Nobody else was in the flat.

“Officers contained the flat to ensure that there was no danger to anyone else.

“At 8.25pm armed officers entered the flat and arrested the 29-year old man on suspicion of affray. There was no violence and nobody was injured. No firearms was found and officers took possession of two knives.

“He is currently in custody for interview and further enquiries.”

Kirsty Miller saw the commotion last night. She said: “One road off Portland Street had a police van across, and the road next to it had police van across top and multiple vans and cars down the road.

“There was a high police presence and they had riot shields.”