Bus on fire outside Brighton Pavilion

A bus has caught fire outside the Royal Pavilion in Brighton this morning (Thursday 4 June). 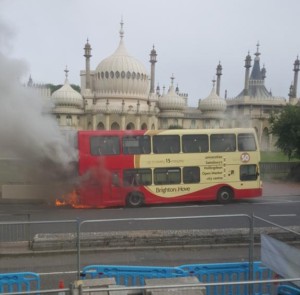 A bus on fire outside Brighton Pavilion. Picture by @PJN74 on Twitter

Fire crews were called to the blaze shortly before 6am.

Paul took this picture and posted it on Twitter.

Police have closed the road while firefighters put out the flames.

A spokesman for Sussex Police said: “A bus caught fire in Old Steine just before 7am.

“Nobody was reported to be on board at the time.

“The fire service are dealng with it and the road in the immediate vicinity was closed to enable them to do so.

“They have it under control and advise us that it is not suspicious.”

“One fire engine from Preston Circus attended the incident on Old Steine at 6.54am on 4 June 2015.

“Firefighters used two breathing apparatus, one hose reel jet and one in seven foam to extinguish the

“There were no reports of any casualties.

“The cause of the fire was found to be accidental. Crews handed the incident over to Brighton and Hove Buses before leaving the scene at 8:07am.” 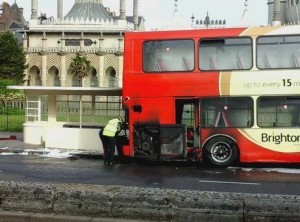 The burnt Brighton and Hove bus by Terry Purcell