A legal attempt to halt building work at Brighton Marina has failed in the Court of Appeal.

Work on the 11 tower blocks under construction can continue as a result of the judgment published today (Friday 26 June).

The case was brought by Robert Powell, representing the Brighton Marina Action Group. 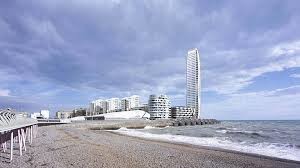 He sought a judicial review of the decision nine years ago to grant planning permission for the buildings, one of which will be 40 storeys high.

The buildings will include hundreds of homes, a handful of restaurants, a yacht club and a new boathouse for the RNLI.

Mr Powell said that the work, which started two years ago, was in breach of the Brighton Marina Act.

The act of Parliament authorised and set limits for building work on the 127-acre Marina site.

The judges have given the act a wider interpretation than that suggested by Mr Powell.

Had he been granted a judicial review, Mr Powell would have applied for building work to stop.

But three Court of Appeal judges unanimously turned down his latest application, backing an earlier decision by a High Court judge.