Brighton MP speaks up for Greeks as debt crisis escalates

Brighton Pavilion MP Caroline Lucas is taking part in a demonstration intended to show solidarity with the people of Greece as the country’s debt crisis worsens.

The Green MP is joining the demo in Trafalgar Square in London this evening (Monday 29 June).

She wrote an article for Global Justice Now – formerly the World Development Movement – today calling for a change of approach.

And she was one of the signatories of a letter in The Guardian newspaper today calling on the Prime Minister David Cameron “to support the organisation of a European conference to agree debt cancellation for Greece”.

The letter said: “We urge the creation of UN rules to deal with government debt crises promptly, fairly and with respect for human rights, and to signal to the banks and financiers that we won’t keep bailing them out for reckless lending.”

In her article for Global Justice Now she wrote: “It’s all too easy, when you hear of markets in disarray and banks closing on the other side of the continent, to forget about the terrible human impacts of the crisis in Greece.

“Over 40 per cent of children are living in poverty, a quarter of the workforce is unemployed, youth unemployment is at almost 50 per cent and the healthcare system is close to collapse.

“Beyond the hackneyed headlines of a ‘Greek tragedy’ are people living on the brink, struggling to feed and clothe their families.

“It’s abundantly clear that the Troika’s (the IMF, EU and European Central Bank’s) plan is failing in human terms – but it’s an economic failure too.

“Since 2010 the Troika has lent €252 billion to the Greek government. Of this, the vast majority of the money was used to bail out banks, pay off the private sector to accept restructuring and repay old debts and interest from reckless lending.

“Less than 10 per cent of the money has actually reached the people who need it in Greece.

“In light of this profound failure, it’s clear that a change of direction is desperately needed from the Troika.

“But the solution to such misery being offered by European Governments and the IMF is … more misery.

“They want more austerity inflicted on the Greeks, indeed they want to entirely strip down the Greek state and refashion it as a servant of capital rather than people. 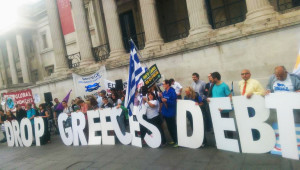 “The stand off we’re seeing this week matters to all of us. It involves a democratically elected government that’s trying – against all the odds – to protect people from the ravages of austerity, pitted against an unelected Troika hellbent on defying the will of the Greek people.

“The Greek government isn’t rejecting any change whatsoever but instead calling for a debt conference, based on the ‘London conference’ which agreed debt cancellation for Germany in 1953.

“That conference agreed to cancel 50 per cent of Germany’s debt to governments, people and institutions outside the country and paved the way for Germany to recover from the crippling war.

“This evening I’ll be joining many others at the Greek Solidarity Demonstration in Trafalgar Square.

“Our demand is that our Prime Minister supports calls for a European conference along the lines of what happened in 1953 to bring Greece back from the brink.

“The people of Greece have shown incredible resilience in extremely difficult times.

“They’ve worked together to provide on-the-ground assistance to those in need – from medical treatment to food banks.

“But there’s only so much cutting the social fabric in Greece can take before it tears apart.

“Any self-respecting democrat can see that further forced austerity in Greece is wrong.

“It’s time for Europe’s leaders, including David Cameron, to stand up for democracy and back a credible solution to Greece’s dire problems.”