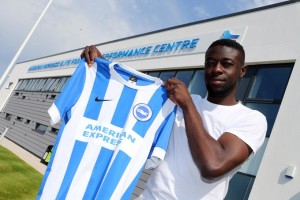 Albion said: “Akindayini has joined the club as a free agent and will now link up with Simon Rusk’s under-21 squad for pre-season training.

“The 19-year-old played the majority of 2014-15 with Tottenham’s under-21s before joining Albion on trial at the end of last season.

“The forward featured in Albion’s two fixtures at Arsenal and Aston Villa and has now signed a development contract with the club.

“He is the second player to join the club’s development squad this summer following the arrival of Joe Ward from Chelmsford City last month.”