Dogs to be banned from Hove playing field

Dogs are to be banned from a playing field in Hove although a small dedicated area for owners and their pets may be set aside out of school hours.

The ban is proposed to be brought in on the BHASVIC field from September as school, college and council bosses aim to make the field safer for children.

The same draft agreement also rules out the prospect of any building on the field.

It follows the “Hove v Gove” battle of the field when it was suggested as a possible site for the new King’s School which opened instead in Portslade two years ago. Its permanent home looks likely to be on the site of West Blatchington Primary School in Hangleton instead. 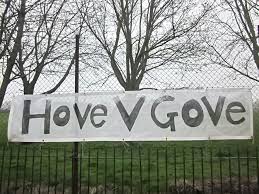 Brighton and Hove City Council, which co-owns the field with BHASVIC, has been trying to broker an agreement between the schools that use the field and the local community, through Friends of the Field.

The council’s executive director of children’s services, Pinaki Ghoshal, will outline the proposal and answer questions at a meeting on Wednesday (15 July).

One of the proposals is: “Dogs should be excluded from the field at all times except in any part of the field that the council (through the executive director of children’s services), the schools and Friends of the Field agree can be used by dog walkers.”

The schools using the field are

The council said: “The actions of a small number of dog walkers who allow their dogs to run free on the playing field, including when it is being used for PE and sport, give rise to serious health and safety and safeguarding concerns which the schools, the college and the council cannot ignore.

“For this reason we intend to exclude dogs from the playing field from the start of September 2015, except for any agreed part of the field where dogs would have to remain on a lead at all times.

“We believe that this is a reasonable exclusion which is in the interests of the safety of all users of the playing field, but especially children and young people.”

The council’s draft proposal said: “The proposed arrangement would include arrangements to allow responsible informal access to the field by the community until half an hour before the beginning of the school day and from an hour after its end on weekdays during term time and at any time during weekends and school holidays, provided that the fields are not required by the schools.”

It also said: “If any use of the field prevents the schools or college from delivering their curriculum or other activities or causes safeguarding issues in relation to pupils, students or staff then the particular informal user can be excluded from the field.

“There are no plans either of the council or of the college to develop or change the usage of the field and if at some future time such plans were considered there would first be consultation with Friends of the Field and/or neighbours of the field prior to it being considered by an appropriate council committee or the BHASVIC board of governors.”

“Cardinal Newman Catholic School is responsible for the maintenance of the field, except for those boundaries that relate to the BHASVIC-owned part.

“BHASVIC pays a proportion of the costs relative to the area of its part of the field.

“Any public use of this school and college playing field must have regard to the field’s primary purpose, which is for education use, and to the health and safety and safeguarding of pupils, students and staff.

“Discussions with the Friends of the Field and other members of the local community have sought to establish an arrangement which respects these concerns.

“Under this arrangement, management and maintenance of the playing field would remain the responsibility of Cardinal Newman Catholic School and BHASVIC. 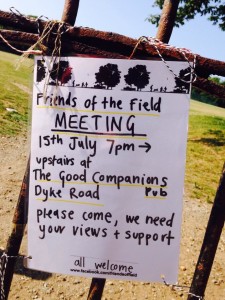 “The local actions carried out by local people such as litter picks are welcomed and should continue.

“The arrangement would include provision for regular review involving the schools, the college, Friends of the Field and the council.”

The draft proposal will be presented to Friends of the Field by Mr Ghoshal at 7pm on Wednesday (15 July) at the Good Companions pub, in Dyke Road, Brighton.