An elderly motorist believed to be aged 87 hit a parked car in Shirley Drive Hove this morning just after 10am.

Eye witnesses said that the woman appeared oblivious to the black Renault car parked outside a house. 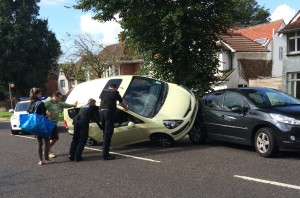 Police were quickly on the scene and were believed to be in area at the time.

An East Sussex Fire and Rescue spokesman told Brighton and Hove News: “I can confirm that ESFRS were called  to an RTC this morning involving   two private vehicles with one person trapped at 10:09 this morning.

“One appliance from Hove and one officer is currently in attendance”

The woman was heard to complain of chest pains to police officers at the scene.