Motorcycle owners are being warned about a spate of thefts of motorbikes and moped across Brighton and Hove. 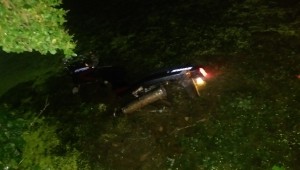 A motorbike dumped in Queen’s Park pond on August 21. The bike was later reunited with its owner, who lives nearby

From 17 August to 17 September there have been been 30 reported thefts or attempt thefts of motorcycles across the city. This is effectively one incident per day.

Many of these motorcycles have been recovered in other parts of the city and beyond, with ignition wires having been tampered with to start the vehicle.

A number of arrests have been made as a result of forensics and with suspects being identified through other enquiries.

Inspector Paul Ransome said: “The common theme for these thefts is unsurprising – the thieves operate throughout the hours of darkness and take the bikes from motorcycle bays and the roadside in general.

“The spread of offences is throughout the city and types range from high powered bikes to scooters and mopeds.

“We are appealing to motorcycle owners to think about the security of their vehicles, where they park and any crime prevention methods they could consider.”

You can also consider purchasing a tracker, chains tied to immoveable objects, bike locks, disabling the motorcycle to avoid it being started, fitting a bike alarm/immobiliser and should report any suspicious activity to the police.

Insp Ransome said: “The rise in motorcycle thefts is alarming and we are considering potential tactics to deter and catch the criminals responsible, but we need the public to play their part.

“I would ask all motorcycle owners to consider any relatively minor steps they can take to prevent crime and protect their property. I would also ask the public to report any suspicious activity in relation to motorcycles to police on 101.”

The bike in the picture was dumped in Queen’s Park pond in the early hours of August 21, and the picture posted by the landlord of the Constant Service on Facebook, which in turn led to a press query from this site, and the bike being reunited with its owner.

A Sussex Police spokesman said: When I was looking up your enquiry, I spotted a motorbike reported stolen from near the pond.

“I thought it was worth passing on to the officer, who went along to the pond, took the owner (who lives about a hundred yards away) to see it and it was his. Owner and rather soggy machine reunited.”