Chris Hughton told Brighton and Hove News this lunch time that he very much enjoys the fact that Albion are at what he called the right end of the table. 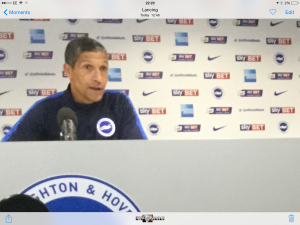 Hughton said: “We are here to win as many games as we can. It’s disappointing when you don’t but at the moment we are on a very very good run which was unexpected.

“We are fortunate to be top at the moment but even if we weren’t, as long as we were in the top group of teams it certainly makes it (the club) a happy place.”

The Albion boss also reflected on Sky Sports’ interest in his team.

Albion feature four times on Sky TV in just over six weeks during the period from mid-November to early January.

Hughton said: “We were the first game on Sky (against Forest) then not all and I imagine that’s a fair reflection on our good start to the  season.