A little bit of Las Ramblas class could be brought to Brighton’s trashiest street under ambitious plans to turn an eyesore building into a swanky new hotel. 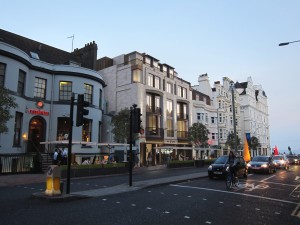 Two developers are working closely together to transform the block where the former Hedkandi nightclub and Walkabout now stand into hotels and a “high quality” restaurant.

As well as a smart new building on West Street itself, Middle Street and South Street will also be smartened up.

The plans are being drawn up for London & Regional Properties and Smart Space by Morgan Carn Partnership, which also worked on the recently approved scheme to rebuild Brighton Square and create two new twittens into The Lanes.

John McLean, Director at Morgan Carn Partnership stated “This is tremendously exciting for our city, West Street is a huge disappointment and lost opportunity.

“Thousands of visitors and local residents flock to the seafront from the station and their first impression is an inhospitable, car dominated street spoilt by some awful buildings. 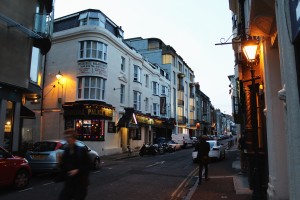 An artist’s impression of the Middle Street plans

“West Street suffers from a tacky image and many of the current uses are a magnet for antisocial behavior, with the dead frontages created by the nightclubs and amusement arcades contributing nothing to the quality of the public realm.

“This is the primary route between the station, seafront and the eagerly awaited i360 and should be Brighton’s equivalent of the Ramblas in Barcelona, a wonderful, vibrant, tree lined avenue with street performers and alfresco dining, an attraction in itself.

“We are hoping to upgrade the pavements and introduce trees and street furniture as part of the proposals and encourage neighbouring landowners to do the same.”

London & Regional Properties, which owns the former Hedkandi building, and Smart Space, owners of Walkabout, Smart Brighton Beach and Backpackers Hostels, are working closely with each other and Brighton and Hove City Council and are both planning to submit planning applications soon.

A public consultation also opens this week to give residents and businesses the chance to see the plans and get involved with the consultation – and neighbours are also invited to help extend the regeneration.

The disused Hedkandi nightclub fronting West Street, which is descibed as one of the city’s worst eyesores, will be replaced by a high quality modern building with proportions and features reminiscent of the original Victorian dance hall.

An equally high quality building will replace another derelict night club and former hotel on Middle Street, which is currently much taller than its neighbours and dominates the synagogue and several other listed buildings opposite. The graffitied dead frontage will be rebuilt and opened up to increase “kerb appeal”. 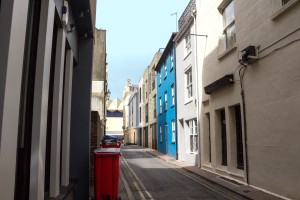 An artist’s impression of the South Street plans

South Street, characterised by wheelie bins and decaying lock-ups, has declined into an unattractive, unlit service road, frequented by revellers leaving night clubs. The proposals will transform the road into a “safe and attractive” secondary thoroughfare, with entrances and windows to a new hotel and a small block of four apartments, which the developers say will provide “natural policing”.

Development Director at London & Regional, Geoffrey Springer said: “The proposed development will bring a disused and semi-derelict site back into occupational use, generating jobs, enhancing the appeal of the Old Town to tourists and creating economic and physical regeneration in the heart of Brighton. We want to ensure that we deliver the very best development, as Brighton deserves.”

Director at Smart Space, Afshin Foulad said: “This is a burning aspiration that we have been working towards since our acquisition of the site and we hope will provide a catalyst for the future enhancement of West Street and the Old Town. We look forward to discussing our ideas with local stakeholders and the general public in due course.”

Meanwhile, plans to convert the floors above the West Street Wetherspoons, the Brighthelmstone, into a hotel with a rooftop terrace have suffered a setback after the pub chain’s first application was refused, on the grounds that it couldn’t demonstrate how it would noiseproof the scheme, and that the height of the building would be too obtrusive.

A new application, which omits the rooftop terrace, has now been submitted.

Whitehawk through to FA Cup First Round Proper