The John Lewis Christmas ad has “done wonders for Whitehawk” according to people who live in the roads where it was filmed. 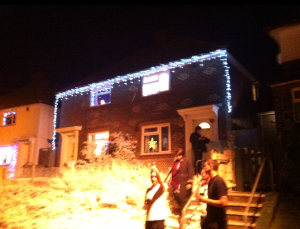 The film crew outside Carlie’s house during filming

The release of this year’s advert, which has become a fixture in the UK’s festive calendar, was met with particular excitement in Wiston Road and Swanborough Drive on Friday.

People living in the two streets say the message of the advert, taking care of elderly neighbours, is something Hawkers already take to heart – and they’re also proud of how the film shows off the area’s breathtaking views and community spirit.

Carlie Selling, who if you look carefully can be seen with her family and friends throwing snowballs, said: “I think it’s done wonders for Whitehawk. We have got amazing views and the advert scenario shows that. It makes it look really lovely.

“We were all in the advert, which we didn’t realise, as we didn’t know they were filming from above. You have to pause and zoom in, but we’re there.

“I have got elderly neighbours and he’s brilliant, he’s always got something in his shed I need, and I drop round pies for him and his wife, who can’t leave the house. I always make sure they’re okay.”

And Rachel Bentley, whose parents’ house in Swanborough Drive was originally going to be used before another house with a velux window was chosen, agrees.

She said: “It’s such a lovely advert. I cried at it, although I cry every year at the John Lewis advert. Everyone on the street is really excited about it. You can’t actually see our house though!

“I think it’s great they’ve picked a charity too. There are a few elderly people in the street that we try to take care of. Adverts like this give you a nudge to do the right thing.”

East Brighton ward councillor Warren Morgan agreed that the advert was good for the area. He said:  “It’s fantastic that Whitehawk and the Bristol Estate feature in probably the most high profile TV ad of the year, and so soon after John Lewis announced they would be opening a new store in the city.

“East Brighton is just as good a location for filming as the seafront, and it’s such a positive thing for our local community.”

Both Carlie and Rachel said the crews who made the advert had been wonderful. The adventure started months ago, when Carlie spoke to a location scout and directed him to the racecourse to get the best views.

Then, in August, he came back and started looking for houses in which to film key scenes.

Carlie, a chef who lives with her partner Scott, son Logan and their two dogs, declined two requests because it would have been too chaotic, but eventually said yes to filming in her living room and son’s bedroom, and outside the house.

The interior scenes ended up on the cutting room floor, but the outside snow scene is a key part of the advert. 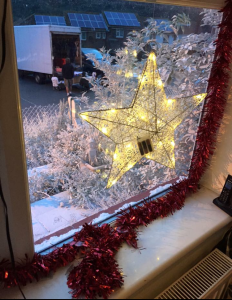 Carlie said filming the snow scene in August had been an odd experience. She said:  “It was really bizarre because that day was really hot.

“We took the dogs out for a walk and came back to all this snow. Our whole house was covered in fake snow, all the trees and the whole ground were covered.

“Your body automatically started to feel cold – it was a really bizarre scenario. The snowball fights in the advert were us with other kids from around the street. One of my friends said you had better put your coat on and then said actually, no, it’s August!”

And in Swanborough Drive, the neighbourhood was also set abuzz when cherry pickers and floodlights were brought in to film the scene where the little girl launches a paper plane from her attic bedroom.

Rachel Bentley said: “Initially it was my parent’s house in Swanborough Drive they wanted to use because they had been filming up on the racecourse and scouting locations, and they’ve got a beautiful garden and the location manager was really impressed.

“There was a bit of hype and excitement in the road for a couple of weeks. But it turned out they wanted to use a velux window for the girl to throw paper planes out of.

“The crew put letters through everyone’s door and they were really polite. It was lovely, everyone was outside and there was a real community spirit.”

The campaign is also intended to raise money and awareness for Age UK. To help or to find out more about “No one should have no one at Christmas”, click here.