Fewer than one on five letting agents in Brighton and Hove had their fees on view when visited during an undercover survey, say campaigners.

Those that did have received congratulatory follow up visits while the others received emails pointing out their duty under the law.

The Home Sweet Home campaign said that this was stage two of its “Stick It Up” campaign.

It said that it had made contact with the 80 per cent of Brighton and Hove letting agents believed to be in breach of recent changes to the Consumer Rights Act. 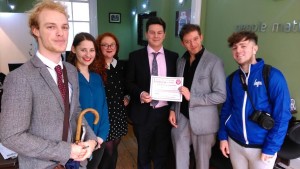 The 80 per cent estimate was the result of an undercover survey conducted three weeks ago. It entailed members of the campaign visiting 67 local letting agents to check their compliance with the new legal requirements.

The campaigners said that they wanted to set a positive tone for their action. They began the second stage with congratulatory visits to the 12 letting agents they knew to be “prominently” displaying their fee schedule – the main suspected area of non-compliance.

Nathan Crombie, director of Belvoir Lettings, in Hove, said: “We were very surprised to be given recognition for what we feel should be common practice and is the right thing to do.

“Operating with transparency will help ensure that tenants receive a consistent level of service and will be able to challenge fees that they don’t feel are justified. This will separate the reputable, trustworthy and honest agencies from the others.”

Toby Powell, director of Winkworth Estate Agents, in Hove, said: “Given the enormous amount of press coverage the lettings market has been receiving lately, we were somewhat surprised to hear that so many agents may be in breach.

“We would welcome more regular health checks as we see this as a way of setting letting agents operating professional, well-run businesses apart.”

A further 55 letting agents were contacted by email, with links to official guidelines published by the Department for Communities and Local Government and “best practice” templates from the Association of Residential Letting Agents.

“For those who might be in breach of the legislation, the guide to best practice gives them an opportunity to ensure they are compliant and possibly avoid large fines in the future.”

The email requested a response by Tuesday 1 December. After this, Home Sweet Home will begin the final stage of its action with a further round of visits to Brighton and Hove letting agents. The campaigners then plan to meet trading standards officers to report their findings.

To get involved with Home Sweet Home, contact Jack Madden on jack@movementforchange.org.uk. To find out more about the CAB’s campaign for renters’ rights “Settled and Safe”, click here.

* Emily Yates wrote about the survey for the Brighton and Hove Independent last month. To read her report, click here.