A suspected old bomb found in a Moulsecoomb garden yesterday was a mortar shell, the army confirmed today, but it was not live. 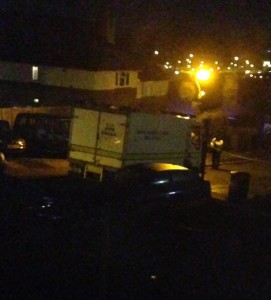 The shell was found by council contractors doing work in the garden of a house in Moulsecoomb Way at about 3pm yesterday afternoon.

The road was closed off, and some homes evacuated as a precaution, until the bomb squad arrived at 7pm and whisked the suspected bomb away for analysis.

An army spokesman said: “It was a mortar shell. It wasn’t live and it was taken away by the ordinance team and it will be disposed of appropriately.

“In effect, it was just a lump of metal. They weren’t able to identify how old it was.”

A council spokesman said: “The ‘bomb‘ was uncovered by our contractors who were doing work at the property. It certainly had the appearance of a mortar, and there was mention of World War Two.

“Being uncovered by contractors suggests it had been there for some time. If it goes back to World War Two – which for all I know may be before the houses were built – then it’s very possible that nobody would know how it got there.”

Moulsecoomb was built by the then Brighton Borough Council in the 1920s and early 1930s. Although Brighton was heavily hit during World War Two, Moulsecoomb largely escaped the bombs and there are no records of any being dropped in Moulsecoomb Way.