Brighton is home to the fifth-most visited library in Britain, according to a survey published yesterday (Wednesday 9 December) although numbers are down.

More than 950,000 people visited the Jubilee Library, in Brighton, in the 2014-15 financial year, according to the Chartered Institute of Public Finance and Accountancy (CIPFA).

It included the figure of 952,083 visits in its survey results which questioned “the long-term sustainability of council-run libraries”.

This was down on the number visiting the Jubilee Library in the previous year, which CIPFA said was 1,003,702. 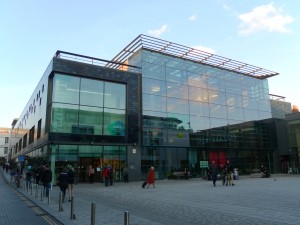 The Jubilee Library in Brighton

CIPFA said that its survey found budgets were down, libraries were closing and visitor numbers were dropping. It said: “CIPFA’s annual library survey also shows that the number of people using libraries across the country continues to fall.

“However, a surge in the number of library volunteers suggests that these services are still valued community assets.”

Brighton and Hove City Council has also opened The Keep, the county archive and history centre at Falmer, a joint project with East Sussex County Council. It also houses the Mass Observation Archive from Sussex University.

The council is consulting on the closure of the Carnegie Library in Hove. While the building would shut under the proposal, the library collection would be housed at Hove Museum where an extension would be purpose-built.

The Carnegie Library in Hove

“Yet there is some hope. Volunteer numbers have nearly doubled over the past five years. Tens of thousands of people are now giving their time to make sure these precious resources survive.”