Award-winning actor, presenter and campaigner Adam Pearson won more hearts as he returned to Brighton University nine years after he graduated to collect a top honour.

He received the university’s Alumnus Award 2016 at the winter graduation ceremonies at the Dome on Friday (12 February) for his campaigning achievements to destigmatise prejudice against people with disability and disfigurement.

More than 1,750 graduates picked up their degrees over two days – Thursday and Friday – at the winter graduation ceremonies.

Mr Pearson has a genetic disorder called neurofibromatosis type 1 (or NF1). NF1 is a disorder of the nervous system caused by gene mutations. Instead of cells growing and multiplying in a carefully controlled way, they grow unchecked. 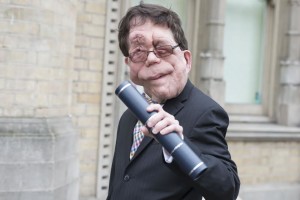 Adam Pearson with his Alumnus Award from Brighton University

He advised graduates to not hold back and to grasp life: “Decide what you want to be and go and be it. Don’t get hung up in the formalities of life that you let it slip you by. Say yes to everything, volunteer when you can. Don’t be afraid to take chance.”

She said: “This comes from an article written by Adam for Changing Faces, the UK-based charity supporting people and families who are living with conditions, marks or scars that affect their appearance.

“As a ‘face equality’ champion for Changing Faces, this quote highlights Adam’s commitment to challenge perceptions and combat prejudice for those living with disfigurement and disability.

“When asked in all seriousness what he feels most proud of to date, Adam quips: ‘Well, I have seen Scarlet Johansson naked … isn’t that why you are giving me this award?’

“And now we are introduced to Adam’s highly infectious and often quite cheeky sense of humour.

“It is this balance between Adam’s determination to make a difference and his ability to generate humour that shines through when looking at his career and achievements to date.” 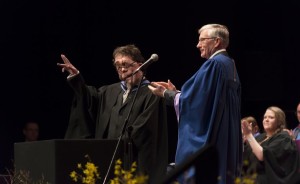 Adam Pearson collects the Alumnus Award 2016 from John Harvey, the chairman of governors at Brighton University

Mr Pearson graduated from the University of Brighton in 2007 with a degree in Business Management and now, at 31, Adam is an award-winning campaigner, actor, researcher and presenter, developing, appearing in and hosting programmes on both the BBC and Channel 4 that have confronted public discomfort about disfigurement.

“He is an accomplished public speaker, having delivered TEDx talks, university lectures and sessions at conferences and schools as part of his efforts to raise awareness of disfigurement and difference and prevent the still often-associated bullying and prejudice.”

Ms Davies said: “Adam’s school years were tough. He was insulted and bullied on a regular basis and often the school didn’t seem to know what to do about it.

“According to Adam: ‘No matter what mind-set you’re in, if you’re bullied at school, nothing makes it easy.

“‘You’ve got a lot going on anyway, your hormones are going wild and you’re trying to get your education sorted, while trying to find where you fit in in this crazy, crazy world.

“‘For me having a disfigurement just compounded that.’

“Things got better when he joined the University of Brighton – three years that Adam remembers very fondly, particularly in terms of the support he received from the university.

“For him, university was a life-changing experience and was so much more than just a degree.

“Adam believes the person you become at university is who you will be for the rest of your life and if, like Adam, you can look at yourself in the mirror and be proud of what you see, then he thinks you are on to a winner.”

The university said: “After graduating, he had jobs in production for the BBC and Channel 4, involved in casting and research for the Undateables series and developing the concept for Beauty and the Beast: The Ugly Face of Prejudice.

“And it was on this ground-breaking programme that we first saw Adam on our screens.

“Raising awareness around the area of disfigurement is obviously important but with the mainstream media throwing out images of unattainable perfection, image has become the be-all and end-all to our current generation.

“As a result this programme had an instant social and cultural relevance.

“Adam’s most recent TV outing was for the BBC Three programme Adam Pearson: Freak Show, a documentary which saw him explore the world of freak shows, meeting people who use their medical conditions to educate, entertain and make money.”