Storm damage and a massive growth of algae have closed one of Brighton’s most popular fishing spots for months over winter. 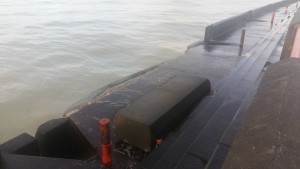 The broken bay at the Marina. Picture by Frank Parker

The breakwaters at Brighton Marina are often closed for a short period each year because the amount of algae makes the arms slippery and dangerous.

But this year, they have been closed since November and will not now open until at least March thanks to continuing stormy weather.

David Grinham, who runs the fishing concessions and Tacklebox shop at the marina, said: “It’s quite commonplace for the wall to close because we get algae like you have never seen before, about an inch deep.

“Because of the wet and mild autumn and winter we’ve had, with non stop storms, it’s worse than ever this year. That, combined with all the damage we have had, with a section of a bay on the east walk coming down in December, means it’s been closed for longer.

“I clean the breakwaters to make them safe and make sure we don’t have any accidents. I usually start cleaning them in March, but I’m just waiting for the gaps in the weather.

“I have been here 21 years and we have never had it closed this long. It’s killed the business stone dead – we are just doing half days at the moment.”

And fishermen waiting to get back onto the breakwaters may find they only get a few days’ fishing in before one of the breakwaters is closed again, as work progresses on phase two of the new Brighton Marina flats, which is likely to restrict access.