The police helicopter was scrambled on Monday night after reports that free runners were on top of a building in New Road. 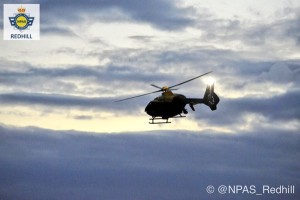 Police were first called to the building at 8.30pm after reports of men on the roof. After the police helicopter joined in the search, three men were found and spoken to for wasting police time.

People working at the building, which currently has scaffolding up, say this is not the first time free runners have got up onto the roof.

One woman, who asked not to be named, said the first they knew of it was when the police contacted them the morning after.

She said: “We are hoping to have some sort of wall erected. We are a listed building, therefore we are limited to what action we can take.

“The joy runners climb up onto the roofs. One day someone will kill themselves – we are right by an electrical substation, falling into the substation could be fatal.

“Unfortunately what keeps happening is that we have cables and pigeon nets at the rear of the building which keep being damaged by the joy runners.”

We're off to #Brighton to give @sussex_police a hand! No need for concern. Give us a wave if you see us! ^MK

A police spokesman said: “Police received a report of men on the roof of a building in New Road, Brighton, at 8.30pm on Monday (4 April).

“Officers attended the scene and the NPAS police helicopter was deployed to carry out an aerial search.

“Three men were located and spoken to for wasting police time.”