A man was left left with serious injuries last night after an unexplained three-storey fall from a house in Hove. 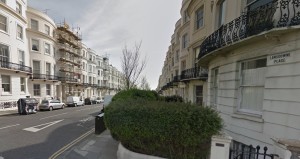 The air ambulance was scrambled after emergency services were called out just before 1am in the early hours of this morning to a house in Lansdowne Place, Hove.

A police investigation is now underway to establish how he fell.

A police spokesman said: “Emergency services were called just before 1am on Wednesday (13 April) after a man fell from the fourth floor of a property in Lansdowne Place, Hove.

“He was taken to hospital by paramedics with serious injuries.

“Police are currently treating the incident as unexplained and are working to establish the circumstances.”

A fire service spokesman said: “At 12.57am on 13 April, Hove crews responded to a request from Sussex Police regarding an incident at Landsdowne Place, Hove.

“One male had fallen from the fourth floor, landing on the first floor pitched roof with possible spinal injuries. Crews made efforts to release the casualty who was left in the care of the Ambulance Service.”