Plans for 100 homes on Ovingdean meadow dismissed on appeal

Hugely controversial plans to build 85 homes on a meadow in Ovingdean have been dismissed on appeal – but the government inspector said a smaller scale development would be acceptable. 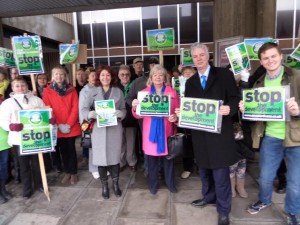 Hundreds of people, including Simon Kirby MP, protested the plans to build on the nine-acre greenfield Meadow Vale site off Ovingdean Road, Falmer Road and The Vale.

Developer Lightwood’s application was turned down in January last year, and now more than a year later, planning inspector Peter Rose has upheld that decision – but he rejected many of reasons for refusal put forward by councillors and protesters.

Mr Rose said: “I have carefully considered all other matters raised, both at the hearing and in written submissions, including implications for tourism, public transport, local amenities, flooding and heritage.

“Beyond the mitigation set out in the section 106 agreement these are not identified as matters for objection by the local planning authority, and I have little reason to conclude otherwise.

“In environmental terms, however, given the implications of the scale of development proposed for local character and appearance, I find that the scheme would be harmful for the reasons described. The council considers some residential development of the site to be sustainable, and I agree, but not to the degree proposed by the appeal scheme.”

Brighton and Hove City Council’s planning department had refused the plans not just because of overdevelopment, but because it could not assess the impacts on ecology and air quality due to missing information in the application.

In particular, the council wanted to preserve a number of plants including Red-Star thistle, Corky-fruited Water-dropwart, and Cut-leaved Selfheal, as well as the Hornet Robberfly.

However, after reading the applicant’s surveys which found there were no significant populations of the dropwart, selfheal or robberfly, and a plan to relocate the Red-Star thistle, the inspector said the scheme would not be harmful in terms of ecological significace.

The scheme was also found to not be harmful in terms of air quality and traffic congestion, and Mr Rose said that the western part of the site “has capacity to accommodate significant residential development”.

His report also referred to the council’s need to find sites for 13,200 homes by 2030, which will now begin in earnest with the passing of the first part of the city plan.