The former Sussex University chemistry professor and Nobel Prize winner Sir Harry Kroto has died at the age of 76.

Sir Harry, who died on Saturday (30 April), was awarded the Nobel Prize for chemistry in 1996, almost 30 years after he arrived in Falmer.

It was while working at Sussex that he and his team made a breakthrough that would change the fundamental understanding of chemistry.

Research by Sir Harry and his colleagues discovered a molecule known as buckminsterfullerene or C60 while researching carbon chains. 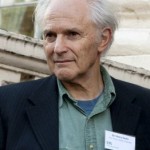 Sussex University vice-chancellor Michael Farthing said: “Harry Kroto’s intelligence was stratospheric – and his contribution to chemistry will live on forever.

“His discovery of the buckminsterfullerene C60 molecule provides not only inspiration to fellow University of Sussex academics and students today but to scientists around the world.

“He was responsible for changing the way modern scientists think about chemistry and he mirrored this with an active role in global politics and the arts.

“His love of so many academic and cultural disciplines meant that he was able to view the world and its possibilities in such a unique and positive way.”

Professor Farthing added: “The many students and academics he worked with at Sussex and other universities around the globe are so fortunate that he took the decision to focus much of his life within education and research – giving others the opportunity to benefit from the power of his mindset.

“Although myself and my colleagues at the University of Sussex mourn the passing of a genius, we feel immensely proud to be part of the legacy that he leaves behind.”

Sir Harry founded an educational charity, the Vega Science Trust, in 1995 and left Sussex for another professorship at Florida State University in 2004.