Brighton and Hove’s new litter cops have been accused of heavy handedness by pouncing on unsuspecting young smokers with £75 fines for dropping cigarette butts – but refusing to disclose any evidence of an offence. 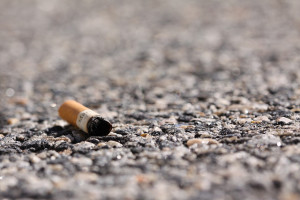 The new enforcement officers began work in the city two months ago, with a remit of fining litterbugs, fly-tippers and people allowing their dogs to foul on pavements.

But the officers, employed by private company 3GS which has been contracted by Brighton and Hove City Council, have been accused of hitting easy targets and using intimidating methods to get them to cough up.

One young woman who says she was given an unfair fine is Anna Haigh, who was followed by two enforcement officers into Subway after putting her cigarette butt in an ashtray by the town hall – or so she thought.

She said: “Apparently my cigarette hit the side of the ash tray/ bin and hit the floor. I can’t prove that that happened, for all I know my butt went in the ash tray with no problem.

“I’ve emailed them but have been told there is no appeals process. I asked for evidence but they said they can’t give it as it might have to be used in court. So I just have to cough up my money because two strange men said so?

“The two men stayed for hours in the same place clearly waiting to catch people out. I’m not in a position financially to be paying that kind of money for something I either didn’t do, or did do accidentally.

“I actually don’t think it’s an awful idea to fine people who litter, but I think they’ve employed a bunch of petty jobsworths to do the dirty work and they’re unfairly fining people who don’t deserve a fine. It’s a good idea, very badly executed.”

Another young woman slapped with a fine was Daisy Shepherd, 19, who was fined for putting her cigarette out on the pavement despite immediately offering to put it in the bin.

Daisy’s mother Mandy Jude said she has paid the fine as she feared it could reach four figures if it went to court, but says the punishment is out of all proportion to the offence.

She said: “She was with three friends who were giving out fliers to local shops, and the litter police stopped them and fined them for not having a licence.

“Daisy went to put her cigarette out on the pavement, and they said that’s an offence – she apologised and said she didn’t realise and offered to put the butt in the bin, but they said it was too late.

“She knows another boy who was fined for dropping his cigarette outside the cafe he works at, even though he sweeps all the rubbish up outside at the end of the day.

“I know it’s not good to put cigarettes out on the street, but she did say she wanted to put it in the bin.”

3GS was formed in 2012 by property developer and then-Hillingdon Tory councillor Paul Buttivant, who has previously tried to buy Wrexham FC and Plymouth Argyle.

It is currently hiring more enforcement officers in Brighton and Hove at a salary of £17,992 a year – about £1,000 more than 3GS offers in most other parts of the country.

A council spokesperson said:  “We are  aware of concerns being expressed about the behaviour of some of our enforcement officers and can assure residents that any complaints will be fully investigated.

“We will continue to work closely with 3GS to ensure that fines are issued fairly and correctly and that this new scheme is effective in its aims – to tackle the problem of litter in the city and keep the streets clean.

“Details about the scheme, how evidence is gathered and the appeals process can be found on the council’s website.”

Each year the council receives dozens of complaints from residents about fly-tipping, litter and other antisocial behaviour and the issues are often raised at residents groups and community meetings.

The scheme was approved by councillors last year and 3GS was awarded the contract following a competitive tendering process. Enforcement officers wear uniforms and body cameras to gather evidence and identify offenders.

The council has warned that those issued with a fixed penalty notice who refuse to pay could end up in court and not only be ‘named and shamed’ but also landed with a much higher penalty and possibly court costs.

No targets have been set for issuing fines and 3GS is prohibited from paying its officers any form of performance pay, commission or bonuses linked in any way to the number of tickets individual officers issue.

Tickets for littering are issued under the Environmental Protection Act 1990, the Cleaner Neighbourhoods Environment Act 2005 and the Anti Social Behaviour Act 2003.