A desperate attempt to catch a runaway dog racing along Hove seafront ended in tragedy on Tuesday night when the bull terrier ran into the path of a bus. 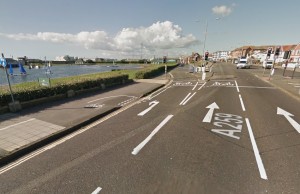 The dog charged along the seafront for at least a mile with two cyclists in pursuit before it dived into the path of the oncoming 700 bus from Worthing by Hove Lagoon.

The road was partially closed for some time while the dog was moved and its distraught owners comforted.

One of the cyclists trying to stop the dog was Labour politician Simon Burgess, who joined the chase after the dog charged into the cycle path as he was on his way home.

He said: “I was cycling home to Hove and this dog suddenly appeared on the cycle lane with a guy chasing it on his bicycle. He was trying to stop it but struggling to keep up with it – it was just racing along.

“We tried to put the bike in front of him but he just charged straight past. With hindsight you think what else you could have done.

“When we got to Hove Lagoon, I was worrying the dog was going to run into the road rather than towards the port so I tried to block the way to the road, but he suddenly just dashed across the road into the path of a bus. He nearly got all the way across, but a bus was coming the other way.

“The poor bus driver was very shocked – he managed to slam on his brakes but it was too late.

“The guy chasing the dog was the brother of the owner and was absolutely beside himself. A bus passenger and a woman driving a car got out to help.

“The brother was inconsolable and waiting for the rest of the family to arrive and the motorist put her coat over the animal so they wouldn’t have to see.

“Another bus picked up the passengers and we were there for almost an hour, flagging down passing PCSOs to help and organising for the council to come and help sort things out.”