Two Brighton artists who were fined for painting a mural in a lane which acts as a showcase for street art say the city’s new litter cops could have a “chilling effect” on the graffiti community. 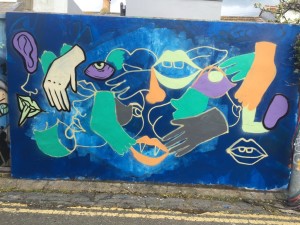 The uncompleted mural in Trafalgar Lane

Jessica Sharville and her boyfriend John Parkinson aka Parky Doodles, both experienced mural artists, were each slapped with a £75 fine for “painting without a licence” in Trafalgar Lane last Tuesday by the council’s new environmental enforcement officers last week, before the mural wsd finished, and their materials confiscated.

Confusingly, Brighton and Hove City Council now says no licence is needed for mural painting and they were actually fined for painting on private property without permission.

But Jessica says they have painted in that spot before with no issues, and as it is an established mural showcase in the North Laine assumed it was legal.

She said: I’ve been painting commissioned murals a few years and my boyfriend Parkydoodles has been painting murals/graffiti for ten years now. This is the first time he’s ever been fined.

“It’s really going to change the graffiti culture of Brighton – people are already talking about it and it’s worrying local artists.

“We were on Trafalgar lane by Travis Perkins which we have painted on before, spoken to locals and people who live there and assumed it was fine to paint there as we’d heard it was all legal and fine.

“They were carrying their Argos shopping as they turned up, they were very militant and separated us for no reason, they confiscated all my pens too and I’m a freelance illustrator who needs and uses them regularly.” 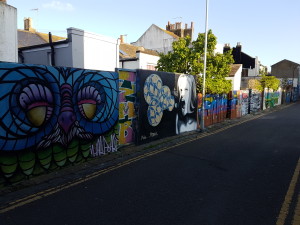 Trafalgar Lane yesterday. Jessica and John’s mural has already been painted over with a black and white image of a woman shouting and blue and yellow orbs

The pair’s materials were returned on Monday, and the council said it stood by the fine. By yesterday, the mural had already been painted over.

The walls belong to houses in Kensington Place, whose gardens back onto Trafalgar Lane. One resident, Ged Flynn, said she was sorry to hear someone had been fined, and welcomed the murals.

She said: “We moved to Brighton last year and we don’t have a mural as we have two access gates, but we don’t have an issue with it at all. Designated areas need to be encouraged.

“When we walk down from the train station, we walk down the lane and it’s full of murals – it’s part of Brighton.”

Brighton and Hove News has attempted to contact the house which owns the wall Jessica and John painted on, but they could not be reached by the time of publication.

Meanwhile, murals on the North Laine’s most well known spot for street art, Kensington Street, are likely to disappear from view when new homes are built on the vacant plots.

An application has been made to build over numbers 4, 7, 9 and 11-14 by Brighton and Hove City Council. This follows a longstanding decision to allow the Guinness Trust to use the sites for social housing.

A council spokeswoman said: “We have looked into what happened in this instance and it is clear permission was not granted. The individual was fined and reminded that it is illegal to graffiti on any surface without the owner’s permission.

“We always strongly advise street artists to make sure they have the correct permission before beginning a piece of art to avoid breaking the law, risking a fine and seeing their artwork removed.

“Brighton and Hove has many street-artists, a number of whom work with the city council and Cityclean to deliver murals and paintings on council-owned buildings.

“The work and the artist are approved by Cityclean and notices are provided to partner agencies, including the police, to legitimise any work. Planning permission must also be sought if required and each case will be considered on its merits.

“Owners of private or commercial buildings are required to maintain them in a reasonable condition and to ensure any art is in keeping with the surroundings.

“If the painting of a building is considered to be harming the attractiveness of an area then action may be taken, likewise if the mural or artwork is advertising a product or service then action can be considered under the advertisement regulations.

“We deal with street art in a way that balances the creative nature of the city with the legal requirement to protect local sites for the benefit of everyone.”

She added that advice on what needs to be done before starting a mural is available from Cityclean on (01273) 292929.