A Brighton busker whose dreams were shattered when he was dumped by Sony after he was diagnosed with a debilitating disease has gone to the US for treatment after his girlfriend raised more than £4,000. 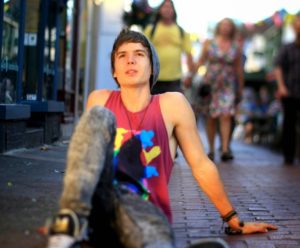 Ren Gill, 26, Brighton, was scouted by Sony while busking in Brighton town centre, but dropped from his record deal after he was diagnosed with Lyme disease in December.

The illness, symptoms of which include heart problems, swollen limbs and crippling headaches, means he can no longer work as a musician.

After treatment in the UK proved unsuccessful, his girlfriend Bibi Lea-Ding, 23, set up the GoFundMe.com page with an aim to raise £50,000.

Bibi said: “One day Ren came down to the kitchen and asked me if I would set up a fundraising page to raise £50,000. My jaw dropped but I couldn’t show him my shock and scepticism in that moment because I felt it would break his heart if I didn’t believe we could do it.”

Mr Gill was originally misdiagnosed with bipolar and chronic fatigue syndrome. He was finally told he had bacterial infection Lyme disease after visiting a private clinic in Brussels.

His girlfriend of two years, Bibi Lea-Ding, 23, said initially the diagnosis was positive.

She said: “Initially it was a relief as there is a real tangible thing to target with treatment, but as soon as we researched cures and treatment it became daunting.

“Regardless of what treatment you go for, success stories aren’t really success stories, people don’t get better, symptoms just become more manageable. You can feel better but over time the bacteria multiply again and you’re back to square one.”

Ms Lea-Ding said the success of the fundraising page was a surprise and has been enough to send Mr Gill for his initial appointment.

She said: “It is amazing for one month but it is 10% and there is still a long way to go. We’re going down other fundraising routes such as event organising.”

The couple used Mr Gill’s large following on his music Facebook page and his Lyme disease blog to promote the GoFundMe page.

Ms Lea-Ding said the response has changed Mr Gill’s prospects about his future.

She said: “Rather than the specific amount of money raised, just the fact that real people from all over the place have donated their money towards his future has given Ren the motivation to not give up on himself and feel more positive.

“The money has been a passport to hop over a few stepping stones, because the one that we were on before was sinking very quickly.”

Ren is due to return to the UK in the next few weeks and Bibi said she was excited for his arrival.

She said: “I keep thinking, if it works, in a year or so we could plan a night out together, or go out for dinner. That’s what I’m most excited for.”