Man plunges to his death from flat balcony

The grounds of a block of flats opposite Surrenden Field have been cordoned off this morning after a man fell to his death. 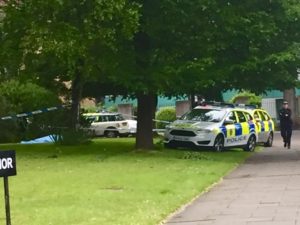 The incident happened at about 6am at Park Manor on Withdean Rise, off London Road.

Five police cars and an ambulance were called to the block, and officers taped off the scene as they waited for a coroner’s van to arrive.

A police spokesman said: “Shortly after 6am on Wednesday (1 June), police were called to London Road, Brighton, where a man is reported to have fallen from a balcony.

“A man in his 20s was sadly pronounced dead at the scene.

“The coroner’s officer has been informed.”

A spokesman for South East Coast Ambulance Service said: “SECAmb was called shortly after 6am this morning following reports a man had been found with serious injuries and was believed to have fallen from height in the Withdean Rise area of London Road.

“Ambulance crews in two cars and an ambulance attended the scene. Sadly the man was pronounced dead at the scene.”

#police search for clues to death or murder near #withdean #brighton pic.twitter.com/zEsbRo2imq