Drug dealing is rife at the Level skatepark, with young skaters at risk of being coerced into dealing drugs or stealing by older criminals, a concerned dad has said. 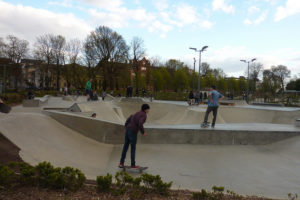 The Brighton father says the situation is so bad he has moved his son away from the area to avoid him falling in with the wrong crowd.

He spoke to Brighton and Hove News after we reported how a then 15-year-old boy broke a 23-year-old skater’s jaw after attempting to sell him cannabis last summer.

The renovation of the park, which reopened in 2013, has won several awards, but its previous problems with drugs, street drinking and antisocial behaviour have proven harder to shake off, with toilets regularly vandalised and needle bins now installed.

The father, who wished to remain nameless, said part of the problem was that CCTV overlooking the skate park was faulty and easily avoided.

He said: “Dealers are basically giving drugs to kids for free then building up an obligation so they can get them to deal and/or steal for them.

“If you walk past the skatepark, dealers are very obviously present. There’s a surveillance camera there but everyone knows it doesn’t work properly and where to go to be out of its range.

“The trouble is not so much cannabis itself, but the methods being used to distribute it (exploiting younger kids to take the risks, creating obligations which then lead the kids to steal on behalf of dealers, which then potentially criminalises them etc).

“And I would say in Brighton it is a gateway drug because the dealers quickly push harder stuff with better margins on the kids.

“I can’t see any middle ground here. Either you decriminalise cannabis entirely or you go zero tolerance. At they very least, don’t let it happen in a children’s play park.”

Inspector Brian McCarthy said: “We are aware of these concerns and we regularly patrol the skatepark area of The Level and run operations there with officers in uniform and plain clothes.

“We monitor all calls to ensure we target repeat areas of anti social behaviour. In the last week we have received no calls to the Level relating to drug dealing or possession of drugs. We work closely with our partners to ensure the safety of the public when using the parks and open spaces.

“If people are concerned about this issue at The Level or they see drug dealing taking place, we urge them to report it to police by emailing 101@sussex.pnn.police.uk or ringing 101.”

A council spokesperson said: “Brighton and Hove’s Community Safety team has been working in partnership with Sussex Police and other agencies to make sure the Level is safe for everyone to enjoy.

“The refurbishment of this popular park has created a vibrant space with something to offer every age-group.

“The area is regularly patrolled by the police and members of the public are urged to call the police non-emergency number 101 to report any suspicious activity there.

“The Level has always been a popular place for people to meet and there have been some issues with drug dealing and drug use there.

“The Community Safety team arranged for medical waste bins to be put in the toilets for the safe disposal of needles, which are now being well-used with few needles being left on the floor of the cubicles.

“The Level is also regularly visited by the city’s drug and alcohol outreach services to try and engage with any drug users and drinkers there.”