Communities Minister Mark Francois praised Brighton and Hove when he made the keynote speech at the Great British Coastal Conference this morning (Thursday 30 June).

The government minister was welcomed by Brighton and Hove City Council leader Warren Morgan who spoke about the £1 billion of local seafront investment planned for the next six years.

Mr Francois raised an early laugh by “revealing” that he wouldn’t be running for the Conservative Party leadership after the resignation of Prime Minister David Cameron.

At the Hilton Brighton Metropole, Mr Francois announced extra funding for the revival of “the Great British Coast” and cited projects such as the Saltdean Lido which have been awarded lottery funding. 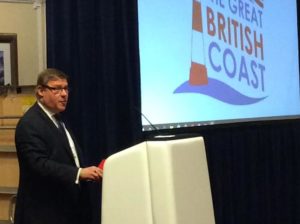 He said: “I am delighted to be in Brighton. Each and every one of you in this room is part of something special.

“Together you are the driving force behind the Great British Coast – something that not only generates more than £8 billion annually in tourism to UK PLC but is also a major contributor to our island nation’s character.

“Given all of this we now want to promote the Great British Coast as a brand in its own right – hence the name of the conference.

“For generations, a day at the seaside was what many of us dreamed of. But with the rise of cheap package holidays abroad, support for our seaside areas ebbed away and many of our historic resorts lost their lustre. They needed some tender, loving care.

“I am here today to tell you that the tide has changed – that this government is determined to rebalance our economy and make sure that wherever you live and wherever you are from, you have the chance to get on and succeed in life.

“These are not just warm words. We have put our money where our mouth is and over the past four years pumped more than £120 million – via the Coastal Communities Fund – into our much-loved seaside towns. 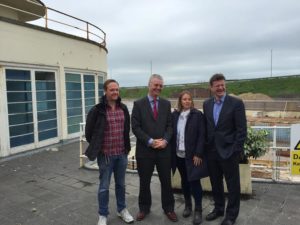 A ministerial visit to the Saltdean Lido which is benefiting from lottery funding by Greg Clark, right, with, from left, Deryck Chester, Simon Kirby and Rebecca Crook

“Many of you in this room will have been beneficiaries and on my many visits to our shore since becoming minister I have seen at first-hand just how transformative that money has been.

“I have seen everything from piers to promenades. I’ve seen new businesses spring up in emerging tech industries. And I’ve seen traditional ways of seaside life once again being taught to the next generation.

“Many of these projects could not have been more different in their methods but all had the same aims – to revitalise our much-loved seaside areas and help them reach their enormous economic potential.

“And this money has been so successful that earlier this year we committed another £90 million Coastal Communities Funding to make sure that momentum isn’t lost.

“But it is not just us investing. Our seaside areas are becoming ever more attractive to other groups who hold the purse-strings.

“In fact, over the past few years the Heritage Lottery Fund has also put in around half a billion pounds – renovating and regenerating thousands of our historic heritage highlights dotted along the shore.

“These are not insignificant sums and these grants, from the £4.7 million given to the Saltdean Lido here in Brighton and Hove, to the £3.7 for the Spanish City Dome in Tyne and Wear, are already making a real difference to local people and tourists alike.

“Many of these investments have gone to restoring icons of the past and helped turn them from decay into something fresh and new.

“And it is essential that the Great British Coast continues to adapt if it is to thrive in the future, just like it did in the past.

“But to make sure that happens. We need your help. At a time when this country is not awash with money, where every penny counts, we need the effort and determination of local people now more than ever.

“We know local people care deeply about their own seaside areas – that’s why in England we’ve funded 118 coastal communities teams across the country to take control of their own area’s regeneration.

“These coastal communities teams have brought local people, councils and businesses together. Each and every one has already submitted radical economic plans for how they plan to drive forward future growth, jobs and prosperity.

“And the involvement of the community – of proper and ongoing engagement – can create a sea change across our shore. 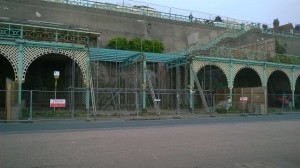 The fenced off Madeira terraces. The council has asked the government for £4 million to help with their revival – Picture by Ken Frost

“The economic plans you all have produced offer a blueprint for the future and are filled with practical ideas to boost economic lift-off in our coastal areas.

“They have impressed me so much that today I would like to announce a new ‘top-up round’ for coastal community teams.

“Our next step will be to develop coastal networks – a forum to share ideas with each other and spur each other on to bigger and better things.

“This is a bottom-up process and we will be looking to you here in this room to provide the local leadership to ensure its success.

“The Great British Coast is potentially a powerful brand and I want all of you here today to consider how you can help to promote it and use a shared language, a shared vision and a shared momentum to drive forward a future for our seaside that we can all be proud of.

“I look forward to seeing how you get on.”