Roads around Brighton Station are set to be closed off as special arrangements are made to deal with the large crowds expected as tens of thousands of people leave Pride on a struggling Southern service. 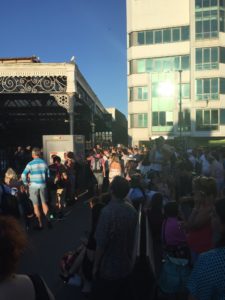 When thousands of people tried to leave Brighton as the trains were delayed one hot Tuesday last month, the station doors had to be temporarily locked to incomers to stop a dangerous crush developing inside.

With ongoing short staffing and industrial disputes meaning there is a slim likelihood of the usual extra Pride trains being put on, the council, police and Southern Rail have met several times to discuss how to get the massive crowds out of the city on Sunday evening.

And with a five-day strike due to start at midnight on Sunday, the knock-on effects are likely to last into Monday too.

Robin Humphries, the city council’s emergency planning and resilience manager, said: “People coming into Brighton for Pride start on Friday evening, and it carries on steadily until Saturday. But the exodus is over a two or three hours period so of course we know we are going to get crowds at the station.

“Once the station is full then there will be a queuing system out in Queen’s Road. The council, police and Southern Rail will be putting out regular updates on social media with more information.

“The message is that if you’re coming to Pride this weekend, expect longer delays and your return journey is going to take longer.

People have got to accept that it’s not going to be a normal departure from Pride – you’re not going to just walk up to the station and get on a train. And expect the roads to be busier.

A spokeswoman for Sussex Police said: “Following the multi-agency meeting this morning we and the Pride organisers will be advising people attending Pride to think about their travel plans and leave plenty of time to travel in and out of the city.

“There will be some rail replacement buses but for the train timetable they need to check Southern rail’s website.”

A spokesman for Southern said: “We are working with the council, the police and the Pride event organisers on the event.

“However, we are working hard to provide the best possible service we can for the Pride event in the circumstances. It’s a little too early to say at this stage what we will be able to run, but we hope to have information on this in the next day or so.”