The debut book by award-winning Hove blogger Katie Kirby made the Amazon top ten on its first day.

The book, Hurrah for Gin, named after her popular blog about the realities of parenting two young boys, was published yesterday (Thursday 6 October) by Coronet, an imprint of Hodder and Stoughton.

She said: “As an editor you become incredibly invested in the books you work on. You work on them for months on end, champion them to people in the company, in the wider trade and frankly anyone who will listen.

“That said, I feel especially emotionally invested in this book. I’d been following Katie for a good while before we began talking about Katie writing book. 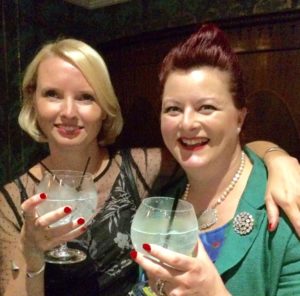 “I have two young boys myself and Katie’s blog had been something of a part of our family lives for a while.

“After a long day, just at that point where the kids were finally in bed and I flopped down on the sofa next to my husband, not talking to one another but instead staring at our iPhones, I would read a post by Katie and think ‘this is my life she is writing about’.

“And it wasn’t just that Katie was telling it like it is and being incredibly relatable to parents in their hundreds of thousands, she was doing it in style.

“Katie has a brilliant acerbic wit, a keen eye for observational detail, a fantastic comic touch and she ain’t too bad at drawing a stick man either!

“Having persuaded a possibly hesitant Katie that she had what it takes to write a brilliant book that could really sell, I am thrilled to be here today to celebrate what we at Hodder feel certain is poised for great success.

“I could go on and on about the good news surrounding Hurrah for Gin – it is only out today and yet it is at number 9 in the amazon top ten of ALL books (that’s higher than JK Rowling and all the celebrities launching their memoirs for Christmas today) and we’ve already had to do three reprints with a fourth one ready and waiting in the wings.

“I could go on and on but I know we are all desperate to hear from the lady of the moment. I will say though that the success is wholly deserved, you are brilliant.

“We all love this book and we love you and I have a feeling this won’t be the last time that we shall be raising a glass to the book. Hurrah for Hurrah for Gin!” 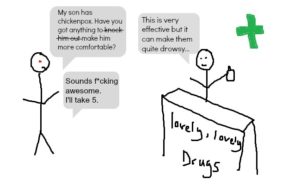 The author herself said: “When I was a little girl I wanted to do three things when I grew up.

She said of her two boys, aged 3 and 6: “They’re the source of my inspiration!

“They do my head in on a daily basis and I love them and they’re my world. They’re not just stick people.”

And, thanking her husband Jim for all his support, she added: “Hurrah for Jim.”

The publisher said: “Hurrah for Gin is a hilarious and honest illustrated account of life with young children that embraces the frustrating, infuriating and wonderful whirlwind of parenthood.

“It is written by the award-winning blogger and mum-of-two Katie Kirby and inspired by the very successful blog of the same name.

“Hurrah for Gin is not a how-to-guide. It won’t tell you how to get your baby to sleep, how to deal with toddler tantrums, how to be a good parent, a cool parent or even a renegade parent. It is a book about parenting that contains absolutely no useful advice whatsoever. 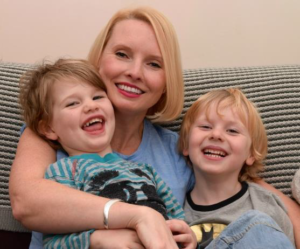 Katie Kirby and her boys

“Instead, it shares brilliantly honest anecdotes and illustrations from the parenting frontline. Giving birth, sleep deprivation, the frustrations of feeding, ‘hellidays’, hangovers with kids and the joys of mixing kids with the general public are all covered.

“Katie captures each story with hilarious accuracy that will universally resonate with parents and make them laugh a lot.

“Hurrah for Gin also demonstrates how it is perfectly possible to love your children with the whole of your heart while finding them incredibly irritating at the same time.

“Katie Kirby lives in Brighton and is mum to two young sons. She started writing Hurrah for Gin in 2013 while on maternity leave from her job as a digital marketer.

“Three years on and the site attracts hundreds of thousands of views per month and has received over three million views since its launch in 2013.

“Katie currently has 165,000 hugely engaged fans on Facebook – an audience which is growing rapidly.” 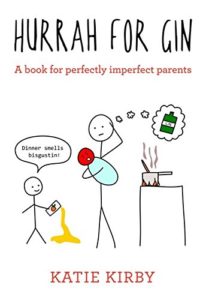 The Daily Mail said: “Katie Kirby’s hilarious cartoons depicting the reality of parenting have turned her into something of a hero for frazzled parents.”

Katie Kirby said: “I try to share the funny and raw sides of raising children in a positive way and my readers often message me to say it has cheered them up after a hard day.

“I am a firm believer that although parenting can be hard work it is better to laugh at the challenges than let them bring you down.

“This book is for imperfect parents who often feel like they are getting it wrong. The ones who lack patience, forget permission slips and serve up beige freezer food for dinner. And the ones who sometimes dream about escaping but in reality couldn’t be happy anywhere else but home.”