A heavily pregnant woman was taken to hospital yesterday (Saturday 8 October) after her car toppled over on to a verge in Brighton.

The accident happened at about 8.30am as Katie Stokes, 31, was driving around the bend in Warren Road near the car park before Wilson Avenue. Her black Ford Focus skidded, clipped the kerb and rolled over on to a grass verge.

Mrs Stokes is eight months’ pregnant and was in the car with her labrador Molly when the accident happened.

Passers-by helped Mrs Stokes and Molly and called an ambulance. Her husband Larry Stokes would like to find the three strangers to thank them.

Mr Stokes said: “I would like to find and thank personally three gentlemen that were at the scene when I arrived and were my absolute heroes who looked after and kept my partner warm by putting a dust sheet over her until the ambulance arrived.

“There were two gentleman whom I’m sure were painter and decoraters, one called Ian, that were in a blue estate car, and another gentleman, who we have since found on Facebook to be Ryan Strong.”

Mr Stokes also thanked a BT engineer Annabel Fleet. He said: “There was a BT engineer lady who was on the scene who got tools to open the car door. I have given her flowers and chocolates. She looked after Katie and Molly.”

He added that she was an “absolute star”. 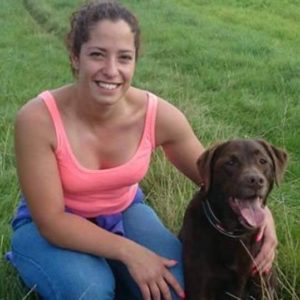 Katie Stokes and Molly the labrador

Mrs Stokes was taken to hospital and discharged that evening with no injuries. Mr Stokes, 38, said his wife had started getting contractions but doctors told them this was due to the trauma and they have since subsided. He said: “My partner, baby and dog are all fine, albeit shaken. We thought the baby might be coming a bit early but all is fine.”

Police were informed of the accident and Mr Stokes said that they were treating it as an accident because of the greasy road surface.

Mr Stokes has been in touch with one of the helpers, Mr Strong, and intends to meet with him to give him a thank-you gift.

Mr and Mrs Stokes are still searching for the other two helpers. Anyone who recognises them through the description is asked to email brightonandhovenews@gmail.com.